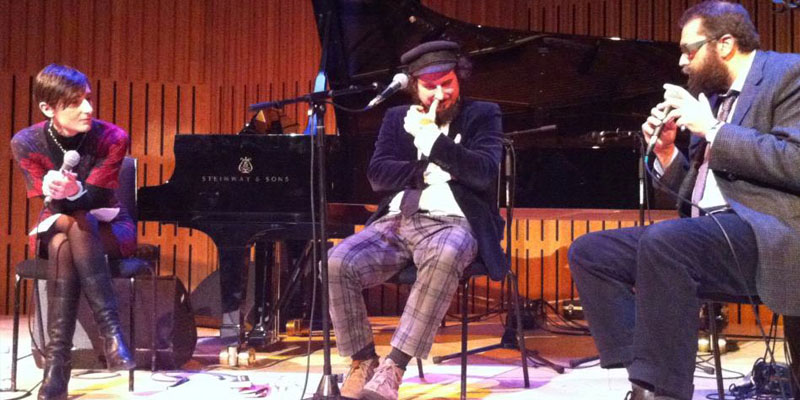 Vinicio Capossela perfomed in Stories from Sailors, Prophets and whales: a talk and a concert, accompanied by Vincenzo Vasi, held at Opera North on 1st February 2013. Vinicio Capossela was in conversation with Stefano Salis (journalist at 'Il Sole 24 Ore', Milan) and Gigliola Sulis (Director of Italian, University of Leeds). The event was co-organised by Opera North (Leeds).

Acclaimed Italian singer-songwriter Vinicio Capossela came to Leeds for his first performance outside London, following his successful show at the Barbican in May 2012.

Over the years, the visionary songs of Vinicio Capossela have been nourished more and more by the classics of world literature. Populated by sirens and Cyclopes, as well as white whales and sailors, Capossela's songs touch the deepest chords of our contemporary sensibility; they resonate with our anxieties, fears, joys.

Booklet of the concert: Capossela's lyrics from the album 'Marinai, profeti e balene' with English translations.

As a student of French and Italian at the University of Leeds, the opportunity to see a renowned Italian artist speak about his work and perform his pieces was not to be missed.

The evening began with Vinicio Capossela talking about his thoughts behind his album, 'Marinai, profeti e balene' ('Stories from Sailors, Prophets and Whales'). It was a great pleasure to listen to this artist, and it seemed strange to have such a famous singer songwriter in such close proximity, with this show being his first UK concert outside of London. As the performance went on, the concert maintained drama and atmosphere throughout, as Vinicio and friend Vincenzo Vasi painted the waves and tumult through the use of piano and synthesised effects. It was really easy to close your eyes as the audience and open them on the Piquad, boat of the Moby Dick tale, and again on the ship with Homer's and then Dante's Ulysses.

We must thank Gigliola Sulis and the Italian team here at Leeds for the organisation of this show, an opportunity which truly demonstrated the richness of Italian culture and its presence here in Leeds. It was particularly rewarding to see so many native Italians gathering to experience 'A talk and a concert with Vinicio Capossela', which only highlighted his popularity and his importance in contemporary Italian culture. We must also thank journalist, Stefano Salis, for his contribution to the event and his glowing review, published in the literary supplement of the financial newspaper, Il Sole 24 Ore. With his help, we were able to bring our event in Leeds into the wider public eye and the forefront of the cultural sector in one of Italy's leading newspapers.

All in all, this was a very culturally educational experience, and one I will remember throughout my academic life studying languages, as I broaden my knowledge on Italian culture.

A few weeks ago, Vincio Capossela, an Italian musical performer took to the stage at the Opera North in Leeds to put on a show. Vinicio's unique blend of ambient noises, abstract instruments and an unorthodox approach to music depicted an important aspect of the cultural nature of contemporary music in Italy succinctly. Vinicio's music captivated the audience - largely composed of native Italians - who were understandably thrilled to be able to see the artist in what was his first performance in the UK outside of London, courtesy of LivItaly.

The event was an eye-opener with regards to the unique approach Vinicio showed towards the music scene, which seems to suggest t

he musical performer is not only leading the way in this experimental musical field, but he is also inviting others to take on such a meaningful view of music as more than a pleasure for the ears. Vinicio achieved this primarily by making the experience visual as well as through engaging with the audience in humour and utilising eccentric instruments such as the variation of a laser harp which was on show at the Opera North. This, in combination with the ambient sounds of the sea during the first half of the performance, contributed a narrative to the songs which seemed to flow into each other effortlessly and harmoniously to tell a gripping story, with Vinicio starring as the narrator. The setting of the theatre certainly lent itself to the style and thus the effect of his music by allowing a level of intimacy and thus closeness with the audience, adding a personal level to the performance, as if a story was unfolding in front of your eyes. The experience was refreshing as a result; a welcome change from the plethora of manufactured pop that we have come to expect from the music industry in the UK, generic beats and repetitive lyrics seem to be the norm in modern music, so Vinicio certainly treated the audience to a much more profound take on what he feels music should be.

Silvia Bergamini (PhD student in Italian): Suggestions from Capossela's talk. The pantheon of literary characters, the journey and the voice.

The pantheon of literary characters

Capossela's talk at the Howard Assembly Room in Leeds was an intriguing journey in the abyss of literature and music: metaphors, mythological figures, symbols, heroes and losers in novels. As Capossela once declared: "The ocean in which we navigate is a paper ocean. Everything comes from literature". Re-interpreting and re-writing are the process to bring alive characters, fears and experiences from the paper dimension of classical books. I was impressed by Capossela's freedom and agility to allow sailors called Ulysses or Achab to "have dialogue" with Prophets such as Tiresias or Job and Sirens like Pryntyl. The album encourages you to explore your memory of readings, adding more characters, for instance Simplicissimus with Robison Crusoe and Gulliver. As readers or listeners we are not confined to one period in time; we can travel across centuries. Sailors, Prophets and Whales reminded me to some extent of Gesualdo Bufalino's Dizionario dei personaggi di romanzo: Da Don Chisciotte all'Innominabile (1982), in terms of their passion for the literary character, for their attempt to save certain cherished and fascinating characters for the future. This quotation taken from Bufalino's anthology (introduction) made me question on  Capossela's album in order to reflect on our role as listeners: "Toccherà infine al lettore [...] giustificare manomissioni così disinvolte, quando sappia giovarsene a ricomporre [...] le fattezze della figura originaria; e a cucirsi con le singole pezze un solo grande romanzo-arlecchino, un film-monstre dall'inguagliabile cast [Bufalino, Gesualdo, Opere/2: 1989-1996, a cura di Francesca Caputo (Milano: Bompiani, 2007), p. 1166]. Are both of these artists attempting to squeeze variety and multiplicity into such a small piece of work? It is so difficult to fit all of these stories into a song and to choose only some stories from the literature tradition, as Capossela underlined during the talk: "In order to choose the music of a song from Sailors, Prophets and Whales I have taken a small bucket and I have to fill it with the ocean". I have discovered in Capossela's first novel Non si muore tutte le mattine (Milano: Feltrinelli, 2006) a similar heterogeneous overcrowding of many historical, visionary and real figures such as Napoleon, Gleen Gould, Goyeneche, together with travellers and prisoners, hussars, builders, etc. in a varied and colorful patchwork of chapters.

Like a necromancer or a wizard, Capossela pulled out from his hat not only monstrous and terrible figures (Cyclops and Giants, whales, etc.), but also many of our alter egos, like Billy Budd or Lord Jim, who through their journey of self-discovery realize their limitations and eventually choose the wrong path. Capossela states: "We have an insane connection with the error but it is one of the most honest manifestations of what we truly are". If we are wandering will we unexpectedly choose the wrong path that could reveal an unknown side of our personality?

Capossela has used the marvel and the sacred as binding agents to fuse all these voices. Capossela has expressed: "what fascinates me about the whale is that it does not choose its partner on the basis of the physical appearance but of its song". Indeed the voice is one of the points of access to the world of marvel. There would not have been literature without the spoken voices of Aedoi and there is no poetic enhancement without Sirens and Orpheus. And here again: from another famous journey Orpheus has mastered for us art, music and poetry.