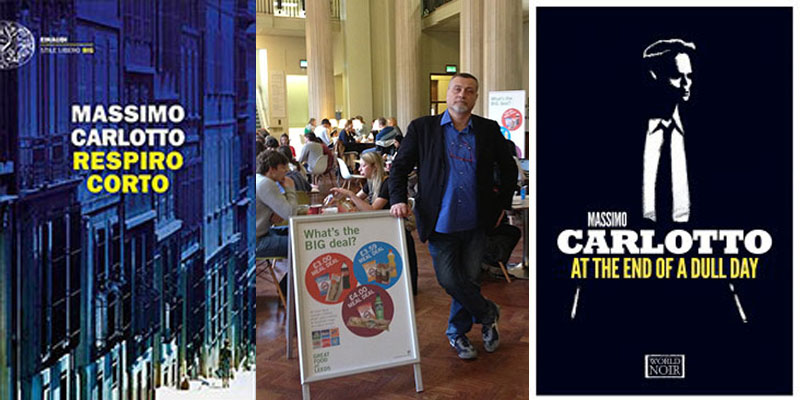 Leading Italian noir writer Massimo Carlotto came back to Leeds (Leeds City Library, 17th April 2013) to discuss in a conversation with Dr. Gigliola Sulis (Director of Italian) his literary representation of Leeds and the globalized society we live in. He presented his latest work Respiro corto (Einaudi, 2012), and his most recent English book, At the End of a Dull Day (Europa Editions, 2013), translation of Alla fine di un giorno noioso (E/O editore, 2011). The talk was in Italian with English interpreter (Claudia Corriero).

Carlotto was our guest for the series Italian Writers in Leeds in 2008. Impressed by the lively international environment that he found at our university, he has set parts of his latest novel Respiro corto (Einaudi, 2012), in Leeds (the last scene takes place in the Parkinson's Court Café). In book presentations he has praised the University of Leeds as a dynamic and cosmopolitan place to work and study.

Having described the criminal side of Italian society in his earlier work, in his new novel Massimo Carlotto goes to the heart of the crime of our time, global and borderless:

"I brought together a group of rebellious youths, who join forces in a Leeds' pub, calling themselves the Dromos Gang. I followed the progress of their enterprises from one end of the globe to another. 'It was an honour to have you here, boys,' were the words of farewell from the university's Head of Economics. And boys they were indeed. Unscrupulous, cynical criminals, but boys nonetheless. In contrast to how we imagine criminal or mafia organisations, these boys have no ties to any one place. They live, play and dream just like others their age."

The event was organised by International Writers at Leeds in association with Leeds City Library and Europa Editions (London).

You can download the booklet with translation of passages from 'Respiro corto' and 'Alla fine di un giorno noioso', that Massimo Carlotto read at the event.

Read here the Kirkus review of At the end of a dull day.

I want to thank you, Gigliola, for organizing these great events and for giving us the chance to put into practice what we have learned so far. Also, thanks to your team for the support. It has been a very very positive experience!
Claudia Corriero (English interpreter of this event)

It was a lovely, very attend event, we'd certainly be happy to working with you in the future. I thought your questions to Massimo were challenging and insightful.
Lynn Towler (Library and Information Service)

Many thanks to you and the rest of LivItaly for the Massimo Carlotto event last night. I loved it! SO interesting, and fun.
Charlotte (student)

One of Italy's best loved writers leads us in a graceful, masterly, but unrelenting dance through the conceited arrogance of the new crime world.  He gives us a powerful story, which stretches from the radioactive woods of Chernobyl to the vaults of Swiss banks, in the company of an irresistible gang of privileged kids.  Zosim, Sunil, Giuseppe and Inez are the Dromos Gang. They met whilst reading Economics at Leeds.

Intelligent, impeccably dressed and totally unscrupulous, yet brotherly to one another. With tiresome parents breathing down their necks, four very young men, from all over the world, swoop down on Marseilles in order to take it for themselves.  They are convinced the world belongs to whoever keeps pace with the money, to whoever is the fastest paced of all, the rest not deserving to live.

At once, it is war with the bad guys, a tough, long-serving Corsican mafia boss, and a disgraced police officer, who has her own, very different, ideas about justice.  Meanwhile, a drug dealer is thrown into the fray, who, fatally named after a footballer, attempts to play a tragic and hilarious  game.  And Marseilles, considered today to be the ultimate place for criminal confrontations, a place where conflicts are resolved with Kalashnikovs, transforms into the epicentre of a giant earthquake, with completely unforeseen consequences.

At the end of a Dull day

Giorgio Pellegrini, the unforgettable hero of The Goodbye Kiss, has been living an "honest" life for eleven years. But that's about to change. His lawyer has been playing him, and now Giorgio is forced into service as an unwilling errand boy for an organized crime syndicate. At one time, Giorgio wouldn't have thought twice about robbing, kidnapping and killing in order to get what he wanted or to get out of a mess like this. But these days he's too long in the tooth to face his enemies head-on. To get back to his peaceful life as a successful businessman he's going to have to find another way to shake off the mob. Fortunately, though Giorgio's circumstances may have changed, deep down he's still the ruthless killer he used to be.