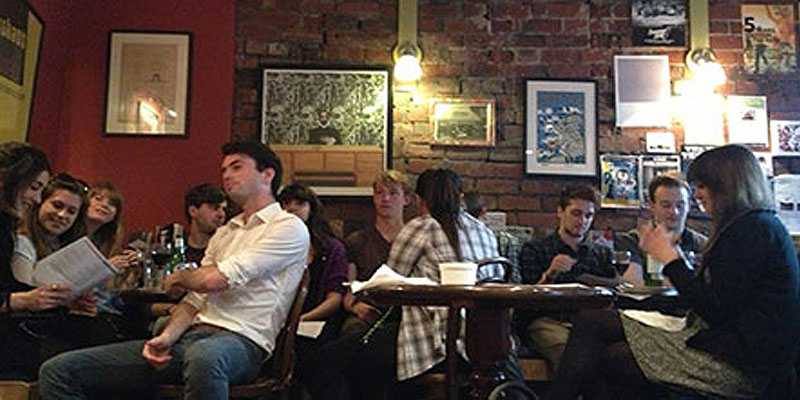 Italian Night At Lento, ideated and organized by Dr. Alessio Baldini, included an Italian dinner and an Italian live jazz concert. Italian Night at Lento was intended as a social event which bore on students' experience and education.

Italian staff and students crammed into the delightfully cosy and intimate Café Lento in Headingly, voted Yorkshire's best Jazz venue in 2012, on Thursday 2nd May for a lively evening of Italian food, drink and music.  Wine was drunk and delicious antipasti and cured meats were eaten with plates balanced on laps, before the jazz duo 'Quei Due' started up, which was the real reason we were all there. The musicians, an English guitarist (Adam Taylor) and an Italian singer (Caterina Comeglio), are a fascinating pair united by their shared love of jazz, and they delighted everyone with their own twist on Italian jazz classics such as 'Se telefonando' by Mina and 'Je so' pazzo' by the great Pino Daniele. 'Quei Due' took us on a real journey through 20th century Italian Jazz history, with tales of love, passion, madness, and sunshine, and booklets of the song lyrics translated into English by current Leeds students of Italian were provided for all the non-Italian speakers. It was a truly Italian evening appreciated by students and staff alike and I'd like to say a big thank you to the LivItaly association run by the Italian department at the University of Leeds, as well as the owners of Café Lento for organising such an interesting and enjoyable evening. Not forgetting a big round of applause once again to Quei Due. We all look forward to the next LivItaly event. - Grace Harland