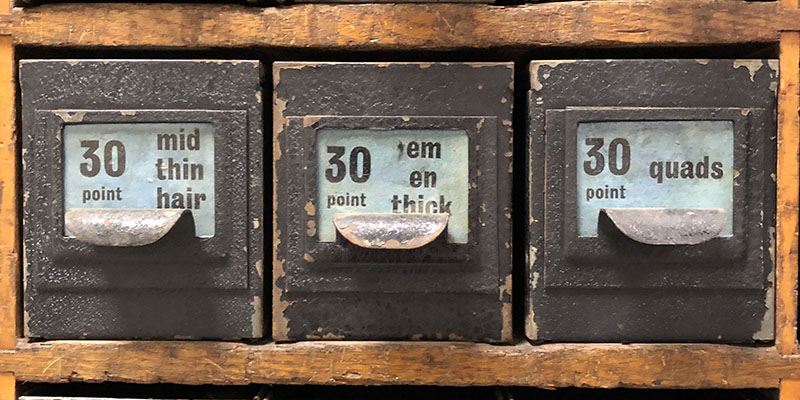 We run a wide range of events both on and off campus including print workshops, seminars and conferences:

Centre CHoP hosted this special seminar on periodical print.  Organised by John Gallagher, it featured three speakers from Leeds, Sheffield, and York, all of whom presented short, informal papers before opening the session up for discussion.  The speakers: Kate Davison, ‘Cultivating an audience: periodicals and commercial print’; John Gallagher (Leeds), ‘If any desires a Tutor’: educational advertising in Restoration periodicals’; Natasha Glaisyer (York), ‘"By a Mistake it was published in the last Gazette": Printing Errors in the London Gazette’.

This seminar focused on nineteenth-century print.  The speakers: Emily Bell, 'Natural Enemies?: The Society of Authors in the Periodical Press, 1884-1900’ and James Mussell, ‘Trading in Death: Dickens, Ephemerality, and the mid-Nineteenth-Century Periodical Press’.

This was a chance for committee and membership to meet, to elect new committee members, and discuss plans for the future.

To celebrate Heritage Open Day Centre CHoP opened the print room, allowing people to print and take away keepsakes designed for the day.

Working with David Armes (Red Plate Press), members of Centre CHoP prepared a public print demonstration to coincide for the University’s Open Day. Visitors were able to print and take away impressions designed to mark the day.

After a screening of Pressing On: The Letterpress Film, Jim Mussell and Chris Taylor alongside the film’s writer, the designer and printmaker Erin Beckloff.

This seminar followed on from a Centre CHoP planning meeting at which the invited speakers helped us think through our next steps after Letterpress Printing.  The seminar featured talks from Caroline Archer (Centre for Printing History and Cultures, Birmingham City University); David Armes (Red Plate Press); Sheena Calvert (Camberwell College, University of the Arts); Will Hill, (Anglia Ruskin); Fiona Ross (University of Reading); Helen Smith (University of York and Thin Ice Press).

Our annual general meeting is a good opportunity to come along and find out more about the Centre.

Featuring keynote lectures by Johanna Drucker, Will Hill, and Dafi Kühne, this this two-day conference explores the survival, legacy and relevance of letterpress printing in the digital era.  See further details.

This workshop, part of our AHRC Research Network, Letterpress Printing: Past, Present, Future and hosted by Bath Spa’s new research centre ‘Making Books: creativity, print culture, and the digital’, examined the interconnected histories of print and digital technologies, and considered how each can help us learn about the other. See further details.

This workshop, part of our AHRC Research Network, Letterpress Printing: Past, Present, Future, explored how historical printing presses and type are being used in research, practice, and teaching and to explore further ways in which they could be used.  Held at the National Print Museum in Dublin, this workshop brought together artists, printers, and typographers, as well as historians, literary scholars, and media theorists. See further details.

This workshop explored the survival and use of historical printing presses and type.  Part of our AHRC Research Network, Letterpress Printing: Past, Present and Future, the event was an opportunity for network participants to share experiences and best practices, and to develop new approaches to such facilities. See further details.

Shafquat Towheed is the director of the UK Reading Experience Database, 1450-1945 and is Principal Investigator of the recently completed AHRC-funded Reading Communities: Connecting the Past and the Present. He is the author or editor of a number of important books and has written extensively on the history of reading practices. With Jonathan Rose, he is co-editor of Palgrave Macmillan’s ‘New Directions in Book History’ series.

This workshop, held in collaboration with the Institut français du Royaume-Uni, investigated the Pencheon Collection in the Brotherton Library.  Created by James Michael Pencheon (1924-1982), the collection contains nearly 3,000 volumes in French and English along with boxes of miscellaneous items: manuscripts, pamphlets, prints, maps, booksellers’ catalogues, newspaper clippings, correspondence and additional ephemera.  The collection raises questions about the formation of the cultural memory of the French Revolution in Britain, about the role and approach of individual collectors of materials on the French Revolution and about what can be learnt about the acquisitions policies and subsequent use of such collections in university libraries.

Speakers included Madame Valérie Guillaume, Directrice of the Musée Carnavalet, Paris, and leading UK specialists from the fields of History, History of Art and French Studies.

We opened the print room on three afternoons this semester, so that staff and students interested in the history of print could visit the room, discuss the equipment and its use, and (by arrangement) use it themselves.

This event, held as part of the city-wide Light Night festival, gave visitors the opportunity to experience an immersive, specially-commissioned performance written and directed by students from Performance and Cultural Industries.  We had over 130 visitors over the course of the evening, each of whom descended the stairs into the dark print room, the presses and performers illuminated only by (electric) candle-light...

1 July 2016 - Holding / Held by the Book, Treasures of the Brotherton Gallery, (Cultures of the Book)

This one-day symposium considered what it means to hold a book as well as the continuing hold the book has upon its readers.  The book has been many things over its long life and, with the emergence of the ebook, is changing once again.  Bringing together scholars and book artists, this symposium explores how the form of the book structures its status as privileged cultural object: what happens to the status of the book, it asks, at a time when the book is taking on new forms? The symposium was held in the Treasures of the Brotherton Gallery.  The programme is here.

This seminar, organized in conjunction with Leeds Digital Humanities, was the latest in our Sadler Series Cultures of the Book.

This postgraduate workshop, also organized in conjunction with Leeds Digital Humanities and part of our Sadler Series Cultures of the Book, provided a hands-on examination of digital resources.

This print workshop, held in the print room, was open to anyone interested in working with the equipment.

This event explored the place of illustration in the seventeenth and eighteenth-century printed book. It featured two speakers: Eva Frojmovic (Leeds), whose paper was entitled 'Between mysticism and science: Menasseh ben Israel's printing work in 17th c Amsterdam', and David Alexander (Fitzwilliam, Cambridge), who paper was 'Scientific book illustration in eighteenth-century Britain with particular reference to the work of Wilson Lowry (1760-1824)'.

This was the first of our regular demonstrations of the print room.

16 October 2015 - Experience Historical Printing at Leeds, part of the Ilkley Literature Festival (Cultures of the Book)

This event gave members of the public the opportunity to visit the Print Room and learn about paper-making, composition, printing, and binding. The event featured a number of Centre CHoP members, including Jim Mussell, Chris Taylor, Jon Topham, and Jennifer Young. Further details here.

12 October 2015 - The Academic Book: Simon Tanner, ‘Investigating REF 2014 as Another Means of Understanding Academic Books’ (Cultures of the Book)

Simon Tanner, from King's College London, is a Co-Investigator on the AHRC/British Library project, 'The Academic Book of the Future' and his paper uses REF 2014 data to consider the state of the academic monograph. Looking both at the proportion of books submitted across the subject panels and then in depth at English and History, Tanner reflects on the role the monograph plays in the economy of scholarly communication and discusses the challenges the monograph will face in the future. Further details can be found here.