Maritimia is an exhibition of works by contemporary Welsh artists held at Cardiff University’s School of Optometry and Vision Sciences and sponsored by the Jubilee Sailing Trust and Cardiff University (30th October-16th December 2009). 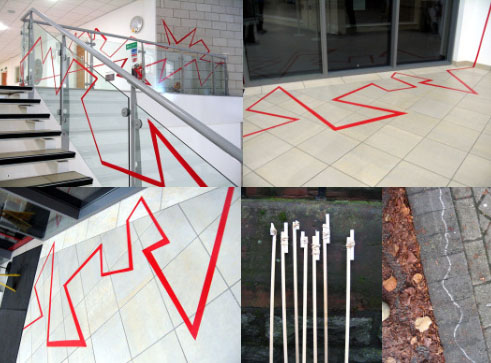 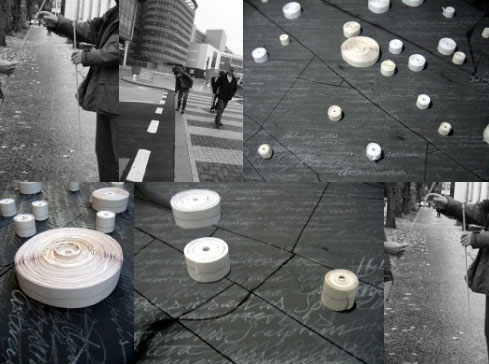 ‘Sealine’ was a collaborative performance that drew a physical line using chalk to link the exhibition at Cardiff University to the sea at Cardiff Bay, a distance of 2.7 miles through the center of the city and performed on the 24th October 2009. Once inside the University building the line continued towards the center point of the exhibition, its form reacting and responding to the architecture and structure of the space around it. The performance and line became instruments to contextualise the art work existing within the experience of each participant and notions of division, border and identity that were being explored in the work. The photographer was Jo Haycock.

‘Lavernock’, the second work in the exhibition interpreted a personal connection with the beach landscape at Lavernock Point which juts into the Bristol Channel south of Cardiff. The piece recorded 26 visits to the location over nine years as a series of individually drawn graphite lines on 26 rolls of paper with a combined length of seven miles. The paper rolls themselves were suggestive of the fossils found at the site. The work accurately recreated a 2.5m square section of rock bed which had been over- written with the given names of creatures from the rich paleontological biosphere of the Planorbis/Rheatic beds of 210 million years ago. The beds themselves record extinction events from the late Triassic early Jurassic boundary and are unique. Lavernock Point is also the proposed site for the western end of the Severn barrage and if constructed would render the geology and site inaccessible to future generations.