Confusing shadow with substance is a collaborative project between artists Janette Kerr and Jo Millett, exploring aspects of Shetland’s relationship with the sea and the past.  Our approach considers the sea as neither inert substance, nor neutral space, and examines the close relationship between land and sea particular to the locality. The resulting three screen video and sound installation, looping continuously with images and sounds creating spatial and temporal connections and disjunctures will navigate between distance and nearness, permanence and transience. 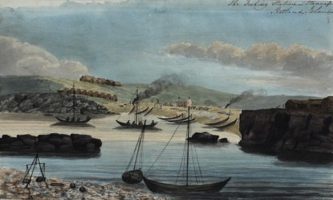 beach and the Böd (photo by J Kerr)

Confusing shadow with substance is a phrase used by local fisherman Davie Smith, describing the process of direction-finding. In the past, fishermen used local landmarks called ‘meids’ to aid navigation and the ‘Moder Dy’, an underlying swell of the sea. This forms part of our conceptual framework.  We will investigate the traces – tangible and intangible – of the once thriving fishing station at Stenness, Northmavine, Shetland, where hundreds of men worked and lived for the summer months in the 18th and 19th centuries.  Unlike the better-known and better-preserved Fetheland fishing station, material remains at Stenness are less discernible, which is why we have selected it as our focus, as nevertheless it remains a portal to a place and time of great activity and sounds, a liminal area between land and the far haaf, and a place for imagining. In this passage between fishing grounds and shore we will re-imagine some of the activities and sounds on the beach, including the event of moving from shoreline to far half by boat.

Janette Kerr is a highly successful painter of Shetland seas, and Jo Millett an experienced moving image and sound artist. Janette’s paintings and drawings have involved historical and science-based research, and been shown widely in the UK and abroad.  She has worked on residencies in the UK, Norway, and more recently the High Arctic. Jo has a particular interest in temporality and location and has made work in film, video and sound through residencies, commissions, bursaries and research. She has shown widely in the UK and beyond and completed a practice-based PhD relating to moving image and the sea in 2013.

We have coinciding interests in the sea and this project interrelates and develops our work. Both have a mutual interest in location, memory and materiality, but from very different approaches through the media we use.

The installation was shown in the Shetland Museum, Lerwick from 22nd July – 27th August 2017.