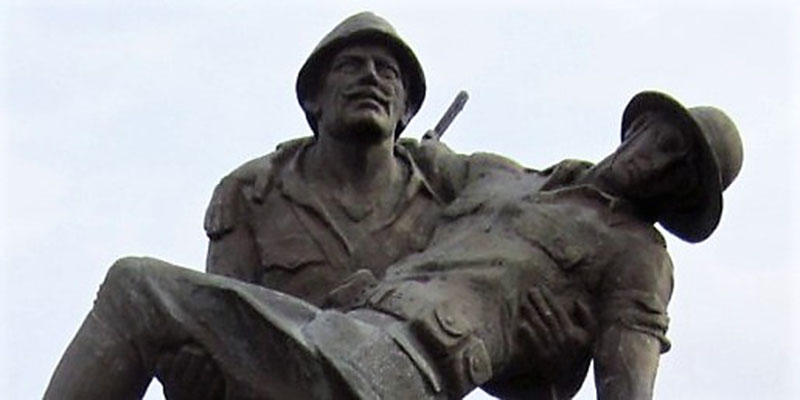 “Unheard Voices: British, Anzac, and Turkish Poetry of the Gallipoli Campaign” is a one-day conference funded by the AHRC-funded Gateways to the First World War Public Engagement Centre. “Unheard Voices” is organised by the University of Leeds in partnership with Leeds City Museums and Galleries.

The conference will host a number of presentations concerning literary, cultural, and historical aspects of the Campaign as well as an evening event with acclaimed poet, writer, and broadcaster Ian McMillan.

The conference and admission to the evening event are free.

Follow the link to register for the conference and book your place for the evening event. 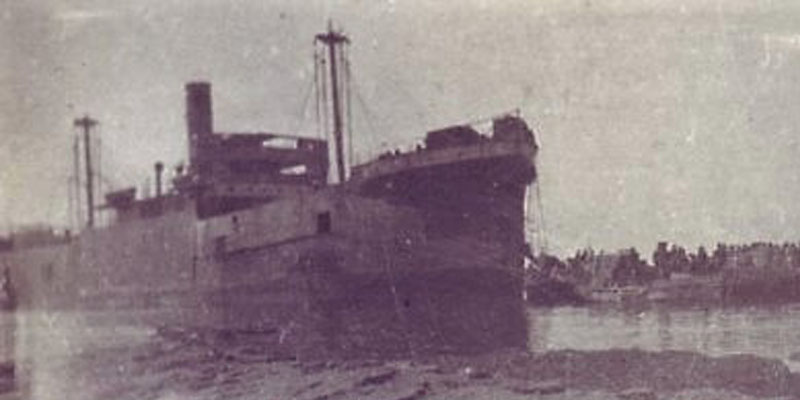 “Unheard Voices: British, Anzac, and Turkish Poetry of the Gallipoli Campaign” conference is the product of an AHRC-funded project with the same title. As the first bilingual study of the poetry from the Gallipoli Campaign, the project is a collaborative research designed to discover, analyse, and publicise poetry composed during the Gallipoli wars (1915-16). By bringing in a fresh comparative look at the literature from Gallipoli front, it aims to contribute to the existing centenary commemorations of the First World War and raise public awareness of the campaign and its literature by leading to new ways of interpreting the Gallipoli campaign.

The major research questions that constitute the backbone of the project are: "What do these poems tell us about the experience of Gallipoli,” “Does the poetry written in Gallipoli differ from those written on the Western Front?”; “Can poems written by poets from the opposing sides of a war share similarities or do these poets see the war in entirely different ways, influenced by the predominant national discourses of war?"; and finally, "Can we trace the signs of a sense of an emerging national identity in these poems that might have been influential in the nation-making process of countries like Australia, New Zealand, and Turkey after the war?"

To answer these questions, the project team (based at the School of Languages, Cultures, and Societies, University of Leeds) is collaborating with several national and local institutions and organisations like Leeds Museums and Galleries, the Gallipoli Association, Centre for World Literatures, Çanakkale Savaşları Gelibolu Tarihi Alan Başkanlığı (Turkey). We are also in close contact with similar projects such as the Legacies of War project and the Gateways to the First World War Project.

Aiming to stimulate participants to feel and share the experience in Gallipoli and encourage local schoolchildren and community groups to produce their own creative responses to the findings of the research, the poems, photographs, and objects from the Gallipoli Campaign are used in workshops that are being held in Leeds Museums, local schools, and community organisations throughout the project.

For enquiries about the project, please contact Berkan Ulu

Although the term “war poetry” is often dominated by poets of the Western Front like Wilfred Owen, Siegfried Sassoon, and John McCrae, there is also a great body of literature to be discovered in other fronts of the Great War.  One of these overlooked yet equally disastrous fronts is the Gallipoli Campaign.

Often credited as the first modern amphibious military operation, the Gallipoli Campaign was a futile attempt to achieve a decisive victory against the Central powers. When it came to an end in January 1916, it had devoured about half a million soldiers from both sides. A century on, Gallipoli is still in the centre of many scholarly studies, although historical, political or military aspects of the campaign so far cover much of what has been said about the expedition. While there is still much to discover about the campaign as a military and political intervention, the literary, sociological, and cultural side of Gallipoli has often been overlooked.

The wars in Gallipoli inspired a great number of poems with a multitude of perspectives. Especially after the unexpected death of Rupert Brooke and the heroic stories of “6 VCs before breakfast,” many poets at home felt the need to write on Gallipoli to encourage soldiers and honour those who lost their lives. Poems from the fighting men were more varied. There were poems written by the educated young British officers, enthusiastic and brave Australians, adventurous New Zealanders, and, on the other side of the firing line, Turks, as the defenders. Some of these poets saw bravery and fear, bloodshed and friendship, or Achilles and Hector when they looked at the Gallipoli peninsula. Others composed poems on simpler things of life in trenches: a dog on a walk in the firing line, men bathing in the sea, or lice and flies. Either way, these poets represented a body of men fighting a war that had proved to be different from what they expected.

Organised by the School of Languages, Cultures, and Societies and Centre for World Literatures at the University of Leeds in partnership with Leeds City Museum, this one-day conference aims to bring together scholars who are interested in the literary legacy of the Gallipoli Campaign with emphasis on the poetry from this front written by combatants and non-combatants alike. The objective is to examine the less canonised, forgotten, or undiscovered voices of the Gallipoli Front, in order to evoke interest in these poets and explore the diversity of their works.

Although we have highlighted the theme of ‘unheard voices’, we would welcome proposals from different disciplinary perspectives on any aspect of the Gallipoli campaign. Topics for papers, therefore, may include, but are not limited to, the following:

The daytime presentations will be followed by an evening event with the acclaimed poet, writer, and broadcaster Ian McMillan reading from his poems and discussing the poetry on Gallipoli.

Dr Richard Hibbitt, Director of the Centre for World Literatures, University of Leeds

Paper proposals should include a title, a 500-word abstract, and a short biographical note with institutional affiliation (where appropriate) and email contact.

Ian McMillan is an acclaimed poet, journalist, and playwright. He is also a broadcaster who presents The Verb on BBC Radio 3 every Friday night and a regular on BBC Breakfast, Coast, Countryfile, Pointless Celebrities, Pick of the Week, Last Word and BBC Proms Plus. Previously, he was resident poet for English National Opera, UK Trade & Investment, Yorkshire TV’s Investigative Poet and Humberside Police’s Beat Poet. In addition to many poetry collections and plays, he has also written a verse autobiography Talking Myself Home and a voyage round Yorkshire in Neither Nowt Nor Summat. McMillan is poet-in-residence for The Academy of Urbanism, Barnsley FC and now Barnsley Poet Laureate.

"Following Islam through German History, 1770-1918. The Relevance for Contemporary Britain."

The exhibition takes visitors on a journey through representations of Islam in German-speaking culture from the late Enlightenment of the 1770s to the Great War of 1914-1918. Looking at texts and images it tracks the shifting values and functions attributed to Islam in German and Austrian society, culture, thought and politics, highlighting both the Islamophobia and Islamophilia of the age and asking visitors to reflect on how these patterns are still with us today in the UK.

The exhibition is touring educational institutions, community centres, galleries and interfaith centres in the UK. It engages an interested public, and contains interactive questions and workbooks for school groups. Whilst the content is not pitched as an academic research output, it has proven interesting and informative for academic colleagues working in this and cognate fields of study. 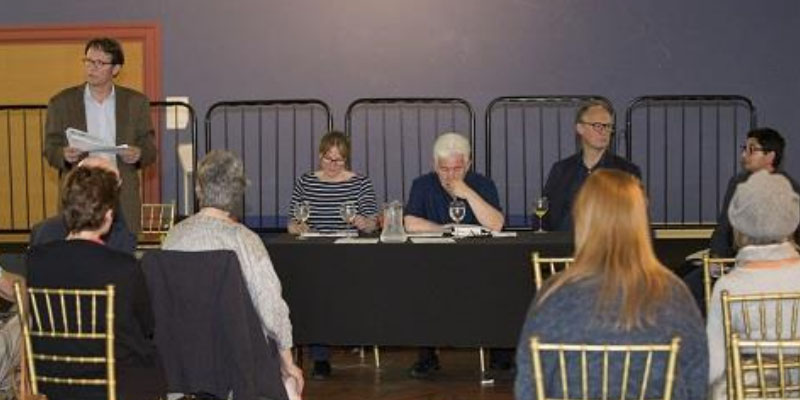 We would like to thank you for joining us at “Unheard Voices: British, Anzac and Turkish Poetry of the Gallipoli Campaign” on 20 June 2017 at Leeds City Museum. We had a very fruitful one-day conference with brilliant contributions from prominent academics from the UK and Turkey.

Our event started off with Prof John Whale (University of Leeds) introducing our first keynote speaker, Dr Jane Potter (Oxford Brooks University). Dr Potter’s address provided an excellent opening for the event as it gave a comprehensive overall picture of Gallipoli poetry by analysing poems by a number of poets such as Rupert Brooke, Nowell Oxland, Will Leslie and Patrick Shaw Stewart. Dr Potter’s paper also made connections between how the campaign was mythologised with references to Troy and the actual experiences these soldier poets shared.

In the first panel of the conference, Lucy Moore (Leeds Museums and Galleries) introduced two notable academics from Turkey, Dr Azer Banu Kemaloglu (Canakkale 18 Mart University) and Dr Mehmet Ali Celikel (Pamukkale University). Dr Kemaloglu’s paper was a valuable contribution tracing the signs of how Rupert Brooke was depicted and mythologised in fictional works dedicated to the Gallipoli campaign. As the only study investigating the echoes of the campaign in novels, Dr Kemaloglu’s presentation was one of the major pieces that completed the picture our conference was aiming to draw. Dr Celikel’s study was greatly in line with the title of the conference. In his presentation, he shared the findings of a Turkish government funded research project (involving Dr Kemaloglu as well) on the poems discovered in the diaries of lay soldiers from Australia and New Zealand. Dr Celikel’s paper also underlined similarities between poems from the Turkish side and Anzac soldiers.

In the second panel, Dr Berkan Ulu (University of Leeds) introduced two more Turkish scholars, Dr Burcin Cakır (Glasgow Caledonian University) and Ozge Bostanbas (University of Northumbria). A PhD candidate working on the literary responses from the two sides of the conflict, Ozge Bostanbas argued how the “enemy” image had been used as a “catalyst” in the poems from the Turkish side. Her presentation also successfully showed how Islamist and Panturkist ideas were manipulated in Turkish literature of the time. In her presentation, Dr Cakır shared the results of another research project on how the legacy of Gallipoli has been misrepresented and exploited in Turkish education system from the 1930s to the present. Giving examples from Turkish textbooks for primary and secondary schools, her presentation showed that there is still a lot to be done concerning the teaching of the Gallipoli Campaign to younger generations.

The final panel of our conference was chaired by Prof Alison Fell (University of Leeds), who introduced Dr Jenny Macleod (University of Hull). With examples from Australia, England, Ireland and Turkey, Dr Macleod’s speech presented how the Gallipoli Campaign has been commemorated around the world to this day. Dr Macleod’s address was an engaging presentation bringing up questions about memory, remembering and forgetting as well as a seemly end to the conference.

After the conference, we gave a reception in the Broderick Hall, a stimulating circular hall in the historic Leeds City Museum. At the reception, we were lured by Dr James Hodkinson’s exhibition entitled “Following Islam through German History, 1770-1918. The Relevance for Contemporary Britain." The exhibition underlined the connection between Germany and the Ottoman Empire prior to the World War I and explored the role religion played in political encounters between Germany and Ottoman Empire.

The evening event was chaired by Prof Whale who introduced Prof Fell, Dr Hibbitt, Dr Ulu, and, Ian McMillan, the renowned poet and broadcaster. We started by presenting some of the findings of our research, a selection of poems in English and Turkish written by poets and lay soldiers who served in Gallipoli, and finally poems written by participants who took part in the poetry workshops throughout the project. This was followed by a discussion of these poems by the panel members. The evening event came to an end with Ian McMillan reading from his own work and a fascinating creative writing activity in which all our guests in the hall participated.

We hope that you have all enjoyed our conference and evening event. Once again, we would like to thank you all for joining and supporting us in a thought-provoking conference and poetry evening culminating literature, history and memory.

Download a PDF of photos from the event here.