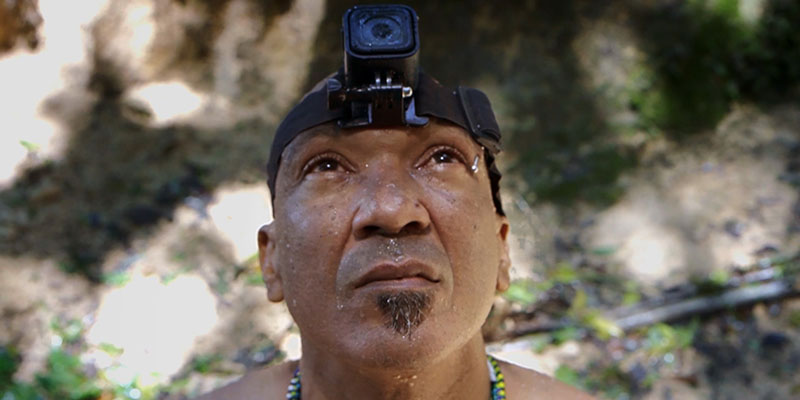 A documentary inspired by the work of the late Dr Anthony Carrigan has been shortlisted for two prizes in a film contest celebrating the best in arts and humanities research.

Intranquilities: Voices from Haiti, is in the running in the categories for Doctoral or Early Career Film Award as well as the Inspiration Award in this year’s Research in Film Awards organised by the Arts & Humanities Research Council (AHRC).

Launched in 2015, the awards celebrate films up to 30 minutes long that have been made about the arts and humanities and their influence on people’s lives. Shortlisted works range from animations and dramas to documentaries and community collaboration projects.

Intranquilities explores the defiance and energy of the contemporary Haitian art world and sets the work of various Haitian artists in the context of disasters such as the 2010 earthquake. Featured artists include writers, painters, photographers and performers, all united by a desire to use their creative practice to reframe how the country’s history and culture is perceived and understood.

The film, made by Ed Owles, is inspired by the work of his friend Dr Carrigan, Lecturer in Postcolonial Literature and Cultures, and was initially funded through the latter’s AHRC Leadership Fellowship, Representing Postcolonial Disaster: Conflict, Consumption, Reconstruction (2013).

Dr Carrigan was particularly interested in creative responses to natural and human disasters across the globe which challenged singular narratives, clichés and stereotypes.

The documentary was developed in close collaboration with the featured artists, particularly the poet James Noël who has written extensively about perceptions of Haiti, and partner institutions such as Le Centre d’Art in Port-au-Prince.

After Dr Carrigan’s death at 35 in 2016, the AHRC agreed to allow colleagues to use remaining funds from the project to continue with the film, which has been made in collaboration between the University of Leeds, KITLV in the Netherlands and Postcode Films – Mr Owles’ production company.

The project team included colleagues from Leeds’ School of English – Dr Clare Barker and Dr Matthew Boswell, and fellow researcher in postcolonial disaster studies, Dr Kasia Mika, a Haiti specialist who completed her PhD at Leeds and who is now at Queen Mary, University of London.

Our intention throughout was to honour the intellectual and creative vision for the project that Anthony articulated during its development phase.

Competition judges included Jan Dalley, Arts Editor of the Financial Times, and Steve Harding-Hill, Creative Director in Commercials and Short Form for Aardman Animations. Catherine Mallyon, Executive Director of the Royal Shakespeare Company and Victoria Mapplebeck, winner of Best Social Media Short at the Research in Film Awards 2018, alongside other film industry experts and academics, had the tough task of choosing the shortlist across five categories.

The winners will be announced at an awards ceremony at the BFI Southbank in London on 12 November. Members of Dr Carrigan’s family will attend.

Winners will receive a trophy and £2,000 prize money to put towards their future filmmaking activities.

For further details, the full shortlist and links to the films, visit the award web pages.

A JustGiving page set up in the wake of Dr Carrigan’s death has so far raised more than £8,700 for The Christie, the specialist cancer hospital in Manchester where he received treatment.