Design project puts making at the heart of pupils’ futures 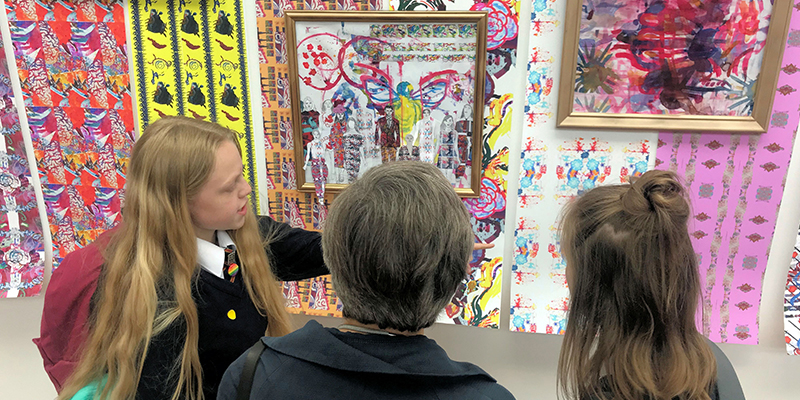 A campaign to reinvigorate craft in schools has culminated in an exhibition of pupils’ textile and design work at the University of Leeds.

Make Your Future, led by the Crafts Council, is a hands-on education programme connecting traditional craft with digital technologies to ignite a passion for craft in young people.

At a time when craft education is facing the challenges of a dip in pupils taking art, craft and design GCSEs, the project has been highlighting the ways in which the subjects act as a cross-curricular bridge drawing together science and technology as well as creativity, bringing together higher education institutions, cultural partners, secondary schools, artists and makers to reignite a passion for making in schools.

Over the last three years of the project, they have worked with more than 1,600 pupils and 58 teachers from 24 schools across the region.

An exhibition opened last night [9 July] at the University’s School of Design, attended by some of the pupils who have taken part, as well as Crafts Council Executive Director Rosy Greenlees and representatives of Arts Council England, which has supported the project, together with The Clothworkers’ Foundation.

Ms Greenlees said: “This fantastic work just shows that if you give young people an opportunity to make and to work creatively, they can produce some amazing things.”

Dr Gaston added: “It’s been great to work with the Crafts Council on this extremely important project.

“We have had a very positive impact on participating schools – for example, one school didn’t have enough pupils interested in textiles to run a GCSE course, but after participating in Make Your Future, 30 pupils have been inspired to study for a GCSE specialising in textiles.”

Pressure on school budgets and a devaluation of creative subjects has seen a sharp decrease in the time, space, and resources dedicated to art, craft, and design subjects in school. Student participation in art GCSEs has fallen by 35% from 2010-2018; the number of pupils taking Design Technology dropped 57%.

In the first three years of Make Your Future, which also saw parallel activity in Birmingham and West London, 63 schools, 117 teachers and more than 4,280 pupils were engaged, including five special schools.

The Yorkshire schools were paired with the University of Leeds and Leeds Arts University to explore textiles techniques including peg weaving, hand-dyeing, knitting, millinery and screen printing.

In all of the regions professional makers worked alongside teachers to deliver workshops in schools. They carried out audits of school equipment and supported teachers to put under-used resources to work and offer pupils new experiences of making.

Next year, Make Your Future moves to Cornwall to engage a new group of schools, makers and partners, although the Crafts Council will continue to support and build networks in Yorkshire, Birmingham and London.

•    The exhibition is open from Wednesday 10 to Friday 12 and Monday 15 to Thursday 18 July (10am-4pm) at the School of Design’s Clothworkers’ Building Central.

Further details about Make Your Future.