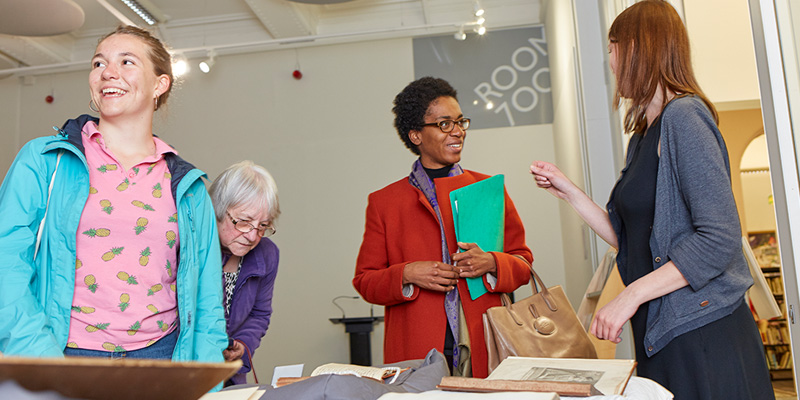 Our postgraduate students are actively encouraged to be involved in the research of the Institute for Medieval Studies by setting up their own research initiatives and events. Recent examples of such activities set up by students include:

This postgraduate conference, hosted in May 2017, was born of the close cooperation of four of our PhD students, Hervin Fernández-Aceves, James Hill, Daniele Morossi and Francesca Petrizzo. The conference featured a great variety and diversity of both papers and research approaches. Ranging from the military to the literary and the scientific, the papers presented truly engaged with the idea of the Mediterranean as a hub of exchange of ideas, trade routes, and conquest.

Both postgraduate students and members of the public attended the conference’s cultural events and academic sessions. The conference was preceded by a series of events open to the public, which included a historical tour around the city, and an afternoon at the Royal Armouries, where conference delegates and public were brought through the rich collections showcased. The conference was the occasion to gain valuable experience and insight into the organisation of such matters, and to liaise with different departments in order to achieve a well-ordered academic event. Valuable contacts were gained across a range of British and international institutions, with an occasion to network with fellow PhD and early career students in a range of different fields and specialisations. The experience was one of the richer and more challenging available to us as IMS students, and doubtlessly one which we hope future students will engage with as well. Find out more about this event.

The Medieval Culture and War Conference

Trevor Russell Smith and Iason-Eleftherios Tzouriadis, PhD students in the Institute for Medieval Studies at Leeds, co-organised with Inês Meira Araújo and António Martins Costa at the Universidade de Lisboa a three-day conference on 22–24 June 2017. This conference was entitled ‘Medieval Culture and War: Spaces, Images, Mentalities’ and continued exploring the important themes established in the first conference held at Leeds on 5–7 May 2016, organised by Sophie Harwood, Trevor, and Iason.

The conference was held in Lisbon and had twenty-five papers in eight sessions, along with two keynote presentations by experts in the field, and a guided tour of the Castelo de São Jorge. It attracted speakers and audience members from the UK, US, and several other countries in Europe. The conference was a success and produced many fruitful debates and discussions that will be continued in the conference proceedings. The next conference in this annual event is in its initial stages of organisation and will be held in Belgium next year.

In 2017/18 four IMS PhD students (Rachael Gillbrand, Sunny Harrison, Rose Sawyer, Vanessa Wright) organised an interdisciplinary conference concentrating upon the cultural history of the body, particularly that relating to bodies that are ignored, by either medieval society or modern scholarship. The weary carthorse, the one-legged beggar and the cradle bound child were all bodies that were ubiquitous and thus/yet invisible; by attempting to access those elements of this landscape that were tacitly understood at the time, but difficult for the modern scholar to access, this conference hoped to encourage a richer understanding of the complexity of medieval life and culture. The organisers prepared a rich and varied sequence of papers, roundtable discussions, and keynotes. This conference was part of a year-long series of events including sessions at the International Congress on Medieval Studies (Kalamazoo) in May 2018 and the International Medieval Congress in July 2018.

The organisers are also developing a programme of public events focused upon a pan-historical and interdisciplinary examination of ‘The Body Obsessed’. This programme will involve a series of public events, workshops and excursions scheduled to take place during the 2017-18 academic year. One strand of the programme will involve a discussion of the theory and practice behind the way in which museums handle, display and curate both human and non-human bodies. This is being organised in cooperation with several Leeds and national museums.

The Leeds Animal Studies Network (LASN) is a collaborative research group set up by Sunny Harrison (Institute for Medieval Studies) and Caitlin Stobie (School of English) to encourage collaborative modes of research which touch upon diverse approaches to the ‘animal’ in the arts, humanities and science. The LASN, which was funded by the Faculty of Arts in 2016/17, is intended as an interdisciplinary hub, fostering connections between departments and networks both within the University and further afield.

In 2016/17 the LASN hosted a very successful and enlightening seminar series, highlighting the work of animal scholars from the Universities of Sheffield, York, Strathclyde and Kent on topics ranging from North American Bioarchaeology to Modernist Ethological Literature. In 2017/18 the LASN will expand on its initial success by hosting the second colloquium of Northern Animals, a network bringing together animal scholars from the north of England.