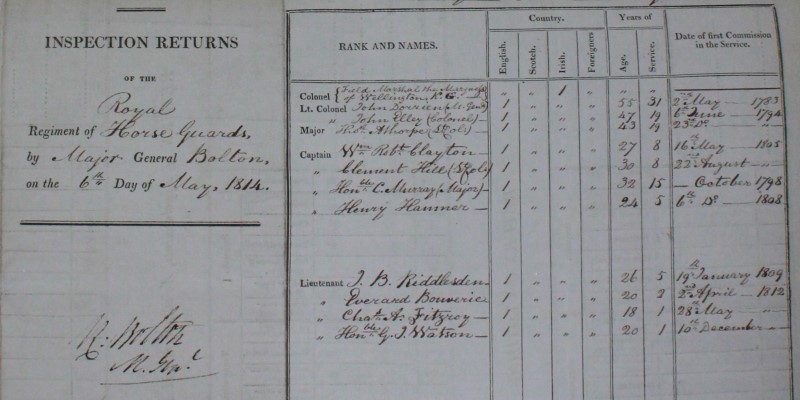 This project will create and explore a ‘life archive’ as a tool to understand people in the past. Unlike the existing digitisation of archival records which just transcribe names, like the recent release of the 1921 census or parish records, this life archive links related records together making a transformational step in digital humanities techniques.

Starting in August 2022, the project will use a case study of British Army officers in the late 18th and early 19th century. This analysis will work on 40,000 officers who served between 1790 and 1830 who were often stereotyped by famous but untypical individuals like Arthur Wellesley, Duke of Wellington.

Exploring the career of officers like Lieutenant James Gordon Ogle of the 33rd (1st West Yorkshire) Regiment of Foot, who joined the Army in 1811 from the West Yorkshire Militia and fought at the Battle of Waterloo is an example of how this project will work.

This record-linking process will allow the exploration of individuals as historical actors and their social networks at a scale that is impossible through traditional historical techniques. Through this fellowship, Dr Kevin Linch will be working with Sheffield Digital Humanities Institute, one of the UK’s leading digital humanities centres, and The National Archives to 're-archive' records.

The publicly available life archive will provide an adaptable and authoritative research and reference tool for scholars and students working on the British Army, as well as family historians looking for information about their ancestors who served as officers. Through the project, we’ll explore what was typical about officers’ careers, who were absent (and why), and the service they had at key moments. The fellowship reflects Dr Kevin Linch’s expertise in the history of Britain’s armed forces during the Napoleonic Wars and working in partnership with archivists and archives.

Working with a Postgraduate Research Assistant recruited for the project, we’ll be delivering workshops and events for the archive sector and the public about the techniques we develop and the Army officers’ life archive. This project links to Kevin Linch’s modules HIST 3685 Georgians at War and  HIST2505 Archive Intelligence, and also our MA War and Strategy course.

About the Arts and Humanities Council

The Arts and Humanities Research Council (AHRC) funds world-class, independent researchers in a wide range of subjects: history, archaeology, digital content, philosophy, languages, design, heritage, area studies, the creative and performing arts, and much more. This financial year the AHRC will spend approximately £98 million to fund research and postgraduate training, in collaboration with a number of partners. The quality and range of research supported by this investment of public funds not only provides social and cultural benefits and contributes to the economic success of the UK but also to the culture and welfare of societies around the globe.