What is the newsletter about?

Florence Scott: ‘Ælfgif-who?’, is a free newsletter which provides biographies of historical women who lived in England between the years 500 and 1100. Each newsletter takes a particular woman, or in some instances a few interconnected women, who lived in this period, and gives a sense of what we can glean about their lives and significance from the (often limited) source material. The name is a pun on the fact that Ælfgifu was a very popular name during the eleventh century, which can become confusing!

Why did you decide to start this project?

FS: I started this newsletter to get my research out to a wider audience. I’m really passionate about academic research being made available to the public, in an accessible format that isn’t patronising. When you’ve spent several years writing a PhD that only a few people might read, no matter how much you enjoy your research, it does make you wonder what the wider impact of that will be. I want to make history available in the mainstream. The history of these women is important, especially as the stories of many are not well known, and I think some people have a false idea that historical women were not influential or interesting, which I hope to dispel.

Who has your newsletter looked at so far and who will be featured in your next issue?

FS: So far, my newsletter has examined the lives of three high status women: Cynethryth, queen of Mercia; Breguswith, the mother of St Hilda of Whitby; and Godgifu, the real woman behind the Lady Godiva legend. Frustratingly often, only the lives of elite women in this period are able to be glimpsed through written source material. However, it is possible to counteract this bias by expanding the evidence we look at. My next issue will feature two unnamed women, one from Elmham, Norfolk, and one from Fairford, Gloucestershire, whose skeletons have been deemed by archaeologists to be of ‘African’ origin. This newsletter will examine interpretations of these skeletons to reveal more about the lives of the women themselves, while consciously working against whitewashed interpretations of early medieval English society.

What are your plans for the future of the newsletter?

FS: In the future I plan on expanding the newsletter. While continuing to regularly publish biographies focusing to individuals, I hope one day to also cover more thematic topics. Some of the subjects I am excited to write on include women on the Bayeux Tapestry, queenly coronations, early medieval English devotion to the Virgin Mary, and women in the so-called ‘Anglo-Saxon Chronicle’. In the meantime, I am steadily working through a list of around forty women from this period whose lives I want to highlight!

Florence Scott is an Institute for Medieval Studies Postgraduate Researcher at the University of Leeds whose research focuses on the development of Christian queenship from the eighth to the eleventh centuries in England, and the religious inauguration rituals in which the wives of kings were anointed and crowned as queens. At the time of writing there are three editions of ‘Ælfgif-who?’ available to read free online. Each issue is released every second Monday, with the next issue being released on 19 April 2021. 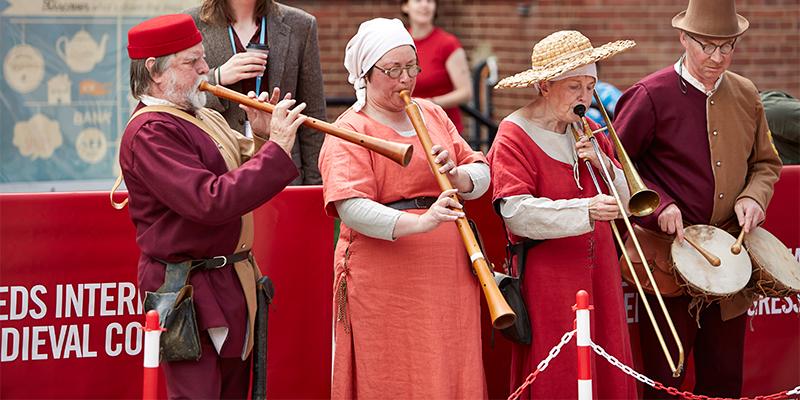 International Medieval Congress the largest gathering of medievalists in the world