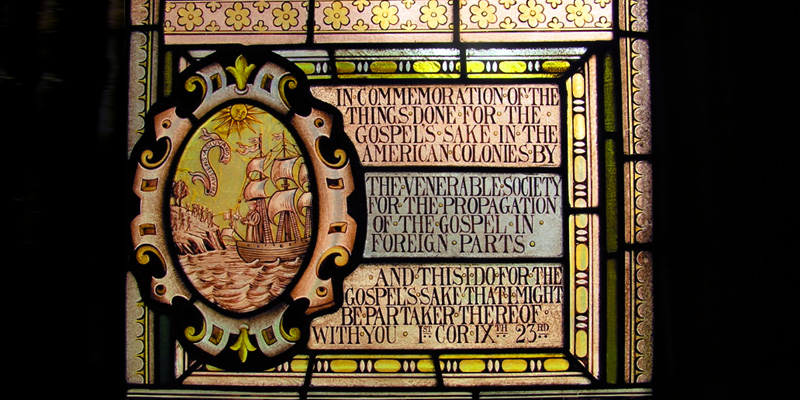 Rowan Williams discusses the archives of the Society for the Propagation of the Gospel (SPG, est. 1701), and its encounters with indigenous and enslaved people.

Rosie Dawson interviews Bishop Rowan Williams for the launch of a new online exhibition exploring the archives of the United Society Partners in the Gospel (USPG, formerly SPG). This conversation marks the 320th anniversary of the Society’s foundation in 1701; it focuses on the early history of the Society and the role of its archive.

In a wide-ranging conversation they discuss early eighteenth-century attempts to recreate the English parish in the American colonies, interactions with and attempts to convert indigenous peoples, and the Society’s historic involvement in the slave trade. The interview is based on archival material featured in a new online exhibition: The Society for the Propagation of the Gospel: A Transatlantic Community of Letters, 1701-1720.

The exhibition and interview are part of an AHRC-funded project, Pastoral Care, Literary Cure and Religious Dissent: Zones of Freedom in the British Atlantic (c. 1630-1720). This project, involving Dr Alison Searle and Dr Emily Vine in the School of English, explores the concept of pastoral care as it was practised in three communities of faith (including the SPG) operating across the British Atlantic between 1630 and 1720. It interrogates how seventeenth- and eighteenth-century organisations like the SPG used letters as a way of providing pastoral care remotely. With its headquarters in London, letters allowed SPG to establish caregiving networks that supported their missionaries in the Caribbean and North America and, by extension, reinforced the pastoral care that SPG clergy provided to their parishioners.

The online exhibition explores a range of items from the first twenty years of the Society’s existence. It focuses primarily on letters, as these were essential to the exchange of ideas, instructions, news, emotional sustenance, and financial transactions across the Atlantic, between Britain, North America, and the Caribbean in the early eighteenth century. It also features wills, minutes, accounts, charters, and seals: such objects help to narrate the complex entanglements that the Society’s concurrent engagement in transatlantic conversion and commerce generated.

The material showcased seeks to foreground those often overlooked in institutional histories of mission work: women, indigenous people groups of the Americas, and enslaved Africans. By making images and transcriptions of selected letters available open access online, this exhibition invites a reconsideration of the relationship between institution and archive, and of the different ways in which pastoral care provision has been communicated remotely.

The full interview will be available from 9pm GMT, 15 February, at pastoralcarearchives.uk

Content Warning: This interview discusses historical records which include offensive language and references to the mistreatment of enslaved and indigenous people.