Writing Back Project commended in 'Images of Public Engagement' competition 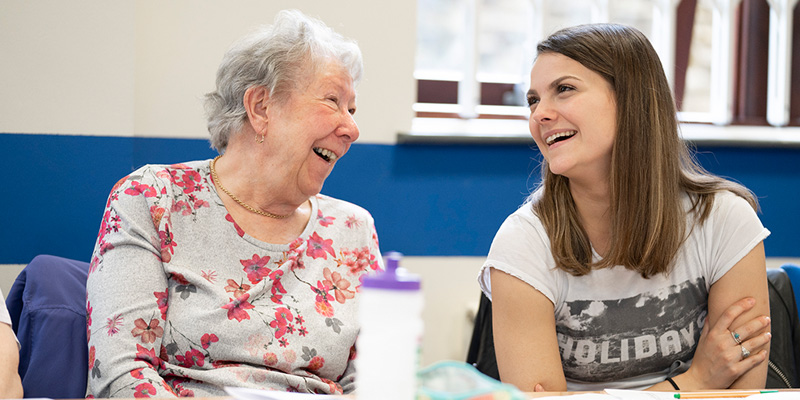 As part of the NCCPE’s 10th anniversary celebrations this year, people were invited to share images and captions of inspiring engagement activities, culture change initiatives, and of people involved in public engagement in UK higher education.

Writing Back is a public engagement project that matches University of Leeds students as pen pals with older Yorkshire residents. The scheme aims to tackle loneliness and improve wellbeing in both age demographics, and gathers qualitative data via questionnaires and the digitisation of correspondence.

'It’s nice to meet other people. When you get a letter it cheers you up and it does make a difference’

Olivia and Shirley (pictured) have been writing to one another since 2014. Olivia completed her undergraduate degree in 2017 and recently invited Shirley to attend her graduation celebrations, and they have continued corresponding during Olivia’s MA year.

Reflecting on the scheme, Olivia said: ‘When you come to university you can get in a little student bubble. It’s nice to meet other people. When you get a letter it cheers you up and it does make a difference’.

Shirley similarly acknowledged: ‘I think if you are lonely or on your own then it’s nice to get a letter. I look forward to getting Olivia’s letters’. Shirley was introduced to the project by Caring Together, based in Woodhouse and Little London, who have been working with Writing Back to refer older people to the scheme since the project began in 2014.

The judges felt that the entry really spoke to the category, capturing a genuine relationship and a wonderful project. They liked how it captured the animation and interaction of their partnership, and enjoyed hearing the voices of the participants in the caption.

The authenticity of the image was also cited, making the relationship between Olivia and Shirley feel very real. The caption gave weight to the image, revealing a sustained and long term commitment to building stronger links between students and older residents.

The judges also felt that the image ‘jumped off the page’, animated by the joy that the two women feel in each other’s company. They thought that the project is inspirational and demonstrates how creative approaches to engagement came make a real difference for communities but also for universities and their staff and students.

View the full selection of images submitted to the competition.