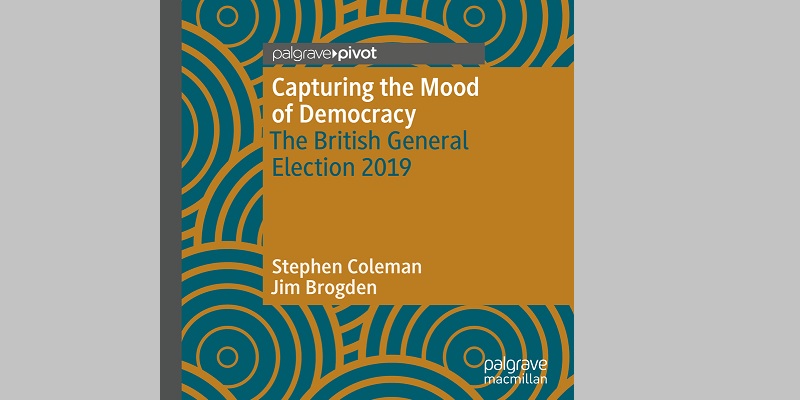 The piece on 'Capturing the Mood of Democracy: The British General Election 2019' will feature in the Yorkshire Post.

Professor Stephen Coleman and Dr Jim Brogden were interviewed on 03 December, by the Yorkshire Post Assistant Features Editor, Chris Burn. The discussion focused on their latest book (situated in Bradford): Capturing the Mood of Democracy: The British General Election 2019 (Palgrave 2020) and the article is to be published in the Yorkshire Post on 12 December 2020, to coincide with the anniversary date of the 2019 General Election on the 12 December, 2019.

“If political science faces a single fundamental dilemma then it has to be how to assess and understand the changing mood of democracy. Capturing the texture and tone of an often angry and apathetic emotional landscape demands innovative methodologies which confront and lay bare the everyday realities of political life. Stephen Coleman and Jim Brogden’s powerful photography and delicate commentary underline the power of visual ethnography to capture the social context in which political events occur.This book is as much a challenge to political science to expand and enrich its methodological horizons as it is to those who seek to understand the contemporary democratic mood. In seeking to capture the democratic mood this is a very ‘BIG’ and hugely impressive little book.”
- Matthew Flinders, University of Sheffield, UK

“Capturing the Mood of Democracy recounts the compassionate journey of two ‘local’ scholars in a post-industrial city at election time, resulting in a nuanced and empirically rich account of what an election does, or does not, with a city and its diverse population. While situated in a particular place and time, this study also offers a profound meditation on the state of democracy as experienced and enacted in the everyday. Moreover, this study constitutes a stellar example of a lyrical multimodal ethnography, integrating brilliantly phrased observations and reflections with equally important expressive photography.”
- Luc Pauwels, University of Antwerp, Belgium

“Brogden and Coleman’s Capturing the Mood of Democracy explores modern British democracy via an exceedingly creative and even beguiling multi-dimensioned ethnography of the 2019 general election. Their book is ironic, nuanced, subtle and penetrating. It reads alternatively like a novel by Ali Smith and a full out exploration of modern Britain. Their book tells us what the current moment is like in England as it demonstrates how ethnography can get at the essence of an historical era, a place and a national social drama. Photographs by Brogden visualize the mood of contradiction, disappointment and possibility that this historical moment offers. The book’s magic lies in its ability to see and communicate at the oblique angle of a glance, a fleeting expression and a surprising insight, informed by the best of modern ethnographic thinking.”
- Douglas Harper, Duquesne University, USA

“Rarely does one come across scholarly works on politics that combine multi-methods and theory as well as Jim Brogden and Stephen Coleman do in Capturing the Mood of Democracy: The British General Election 2019. I highly recommend it for intelligent readers at any level who want a deeper understanding of how moods of various voting publics are created and impact on important political decisions. As a Visual Sociologist, I was especially impressed with how deftly images are knitted into both the thick description and, more importantly, the analysis of these critical elections in Bradford, a city described by the authors as a ‘microcosm of British history.’ In this way, the authors allow the reader to not only hear about the moods of voters but see them as well.”
- Jerome Krase, City University of New York, USA

“How do the thoughts, feelings and environments of normal life constitute electoral politics? Pacing the streets and homes of Bradford, the authors provide a vivid glimpse into the mood of the 2019 British general election, and a vital new perspective on how politics feels. By gathering together evocative and sensitive photographs with detailed diary entries, it opens an important new route to understanding how politics is made and made sense of in the everyday settings where it matters the most.”
- Shanti Sumartojo, Monash University, Australia