Breaching the fence for nuclear peace: the 1980s to the present day 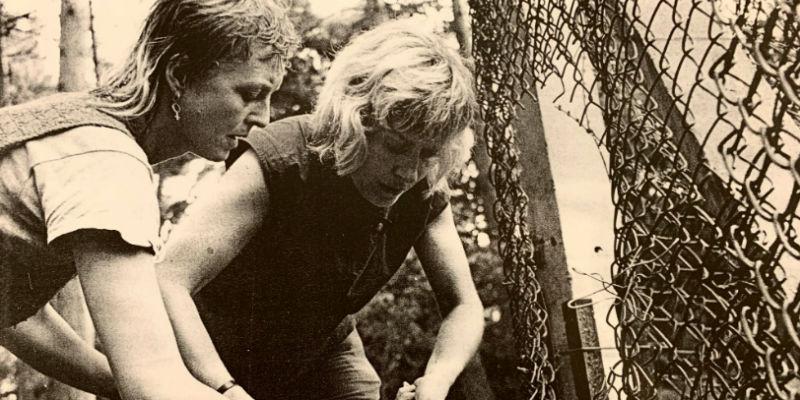 An exhibition of feminist peaceful protest at Greenham Common and Menwith Hill, exploring how the women’s campaign has shaped future generations, opened on 12 December at the Brotherton Library.

The 1980s saw the beginnings of feminist, anti-nuclear peace camps settling at the sites of two UK military bases. The women lived in temporary camps in response to the storage of American cruise missiles at Greenham Common, and an American spy centre at Menwith Hill.

Their deliberately staged protests, “die-ins” and military base breaches were documented to the world by the media who were unkind in their portrayal of these women.

Even though the women were often arrested and forcefully evicted from their camps, they were successful in getting the nuclear missiles to move from those bases. This exhibition is a celebration of their incredible achievement.

Curated by MA students from the School of Fine Art, History of Art and Cultural Studies, ‘Til the Skies are Clear follows the nuclear debate from the end of the Second World War, through the Cold War, and up until the present day. Personal documents, photographs, songs and an interactive display lets the women’s own experiences inform us of the era.

To achieve their goal, the women referred to the atomic bomb drops on Nagasaki and Hiroshima (1945), Sellafield Disaster (1957) and the Chernobyl Power Station accident (1986) through their protests and campaigning, to remind everyone of how devastating nuclear destruction can be.

Some of the women involved in these peace camps went on to have active political careers, such as Helen John whose vast collection is held in Special Collections at the University of Leeds. Their hard work and determination have shaped nuclear politics today.

Abbie Smy, a student from the MA Arts Management and Heritage Studies course, reflected on her experience working on the exhibition:

“Recreating the authentic, passionate voices of the women who lived and protested at the peace camps has been an incredible experience. Their story is so loud, and so relevant to today’s nuclear politics, that it deserves to be shouted from the rooftops.

“Our temporary exhibition celebrates their story and successes against the nuclear threat. It follows this threat into the present age and invites you to join the fight for global nuclear peace.”

The items shown in this exhibition are a small selection of what the MA students found in the vast collection of the Feminist Archive North. The archive was created in the 1980s and moved to Special Collections in the Brotherton Library at the University of Leeds in 2001. It holds many feminist materials on topics such as domestic violence, employment, family, health and the Women’s Liberation Movement.

‘Til the Skies are Clear is one of many installations around the University of Leeds, all of which have been undertaken by MA students in the School of Fine Art, History of Art and Cultural Studies. See here for details of all of this year’s exhibitions and projects.

The exhibition continues to 21 January in the foyer of Special Collections at the Brotherton Library. Venue details including opening times can be found here.