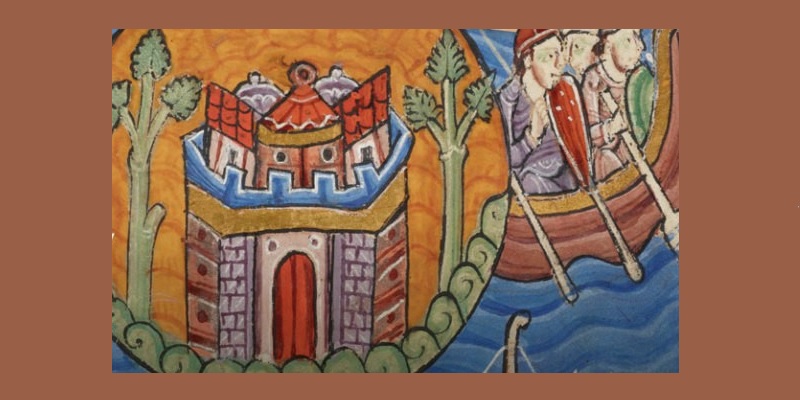 On Tuesday 23 June, the penultimate webinar in the IMS in Conversation series focussed on two new publications from Professor Catherine Karkov, Chair of Art History. Professor Karkov was interviewed by Dr Rose Sawyer, a recent Doctoral graduate from the IMS, currently a Stipendiary Lecturer in Old and Middle English at Keble College, Oxford. A staggering 107 people signed up for this webinar, which is the largest number of online participants the IMS has ever hosted.

The first publication, Imagining Anglo-Saxon England: Utopia, Heterotopia, Dystopia (Woodbridge: Boydell, 2020), discusses the fascinating premise that 'Anglo-Saxon England has always been an imaginary place.' Professor Karkov discussed the debates currently ongoing in the academic field surrounding the use of the term ‘Anglo-Saxon’, explaining that, now more than ever due to recent events concerning the Black Lives Matter movement, research that engages with these debates has never been more pertinent.

Professor Karkov explained that the inspiration for the book came from Karma Lochrie's book Nowehere in the Middle Ages, in which Lochrie discusses Thomas More’s Utopia as a ‘somewhere’. Professor Karkov then began to think about whether the reverse could be said of Anglo-Saxon England, and the implications for the study of this region in the medieval academic sphere. Professor Karkov maintains that despite ‘postcolonial theory’ being an inherently modern development, the waves of colonisers rendered Anglo-Saxon England a postcolonial state, and it should be researched as such.

A large portion of the Q&A section was devoted to the discussion of the use of the term ‘Anglo-Saxon’, and the ways in which this publication contributes to the process of moving toward terms such as ‘Early Medieval English’. Participants from across many disciplines engaged in a lively debate surrounding the use of loaded nationalist terms, demonstrating how very pertinent publications of this type are in today's climate of decolonising the curriculum.

After discussing Professor Karkov’s monograph on Anglo-Saxon England, the attention was turned to the second publication, Slow Scholarship: Medieval Research and the Neoliberal University (Woodbridge: Boydell, 2019), this time an edited collection. The inspiration for the title comes from the Slow Food movement, and this book represents a tool of resistance. The origins of the book began with a couple of sessions at Leeds IMC 2014, and it has since grown into a collection of critical essays on the cultures of increased speed and bureaucracy in UK HE institutions, aiming to promote a slowing down and a reclamation of research within the academic community. Professor Karkov’s comments on this publication prompted a wider discussion amongst participants about the importance of the slow scholarship movement, which gave Postgraduate students and early-career researchers a unique and serendipitous opportunity to learn from the more seasoned academics who shared their own experiences with the REF and the culture of mass digitisation.

The two publications discussed in the session received an overwhelming response from participants, who were keen to ask about the impact of the research upon the future of Medieval Studies and the wider academic community. It is clear from the discussion that ensued that these publications have had, and will continue to have, a huge impact on medievalist scholarship, and an excellent time was had by all.