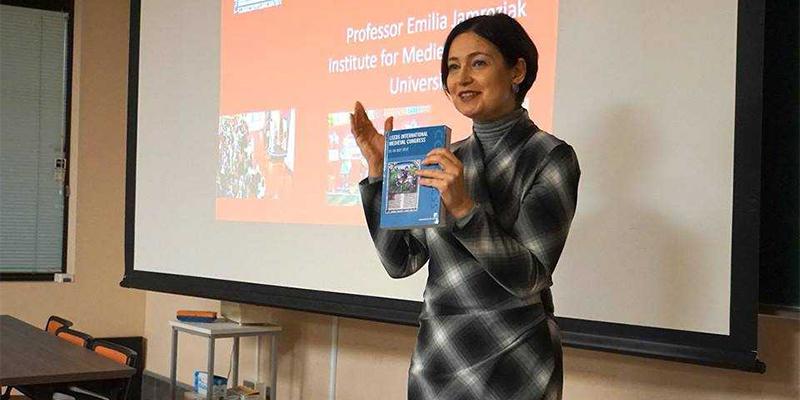 Emilia Jamroziak, IMS Professor of Medieval Religious History, has been awarded a year-long fellowship for the project The powerful afterlife of medieval monasticism – from the tyranny of origins, nationalism, modernization paradigm to the transcultural perspectives from 1 September 2019 – 31 August 2020. The aim of the project is to explain key historiographical processes that the history of medieval monasticism has been subject to from the nineteenth-century onwards.

The MWK-Fellows COFUND International Fellowship Programme for Experienced Researchers is co-financed by the European Union and sponsored by the Max Weber Centre for Advanced Cultural and Social Studies, based in Erfurt, Germany. The centre combines the functions of an Institute for Advanced Study and a Research Training Group, meaning that the Fellows appointed to the College work on a project that substantiates the research priorities of the College and also collaborate with doctoral candidates and postdoctoral researchers to promote teaching research,  research learning, and task-based teamwork.

The International Fellowship Programme offers fellowships to experienced researchers who are conducting interdisciplinary research in cultural and social studies. Fellowships are awarded competitively through an open, merit-based and transparent multi-level selection process.

Successful applicants have the opportunity to conduct their own, freely chosen, independent research project in an intellectually stimulating and vibrant research environment provided by the Max Weber Centre. Fellows benefit from the advanced study programme; an excellent research infrastructure; individual support, guidance, and training; and mobility and networking opportunities.

Jamroziak described her ultimate aim as ‘to explore and dynamize theories of modernisation that are behind much of the past and current interpretations of monasticism – and medieval religious history more broadly’.

...to explore and dynamize theories of modernisation that are behind much of the past and current interpretations of monasticism – and medieval religious history more broadly.

Far from being marginal, the modern historiography of medieval monasticism is a powerful test-case for a wider understanding of the interpretational processes of history, meta-levels of historiographical developments as well as opportunities presented by transcultural approaches that emerged in recent years.

The project builds on Jamroziak’s previous and current research, focusing on the interactions between religious institutions, especially Cistercian monasteries and the laity from the early twelfth to the early sixteenth centuries. Geographically, Jamroziak’s work spans Britain (particularly the North and Scotland), Central Europe, East-Central Europe and the Baltic.

In particular, the project utilizes Jamroziak’s expertise in comparative studies and established knowledge of historiographical traditions in both Western (especially German- and English-speaking scholarship) and East-Central European (academic studies in Slavonic languages) areas.

The project will be a thematic examination with chapters focusing on varied interpretational paradigms and will explore different intellectual underpinnings, influences and constructs that contributed to the developments of each of these models of interpretation.