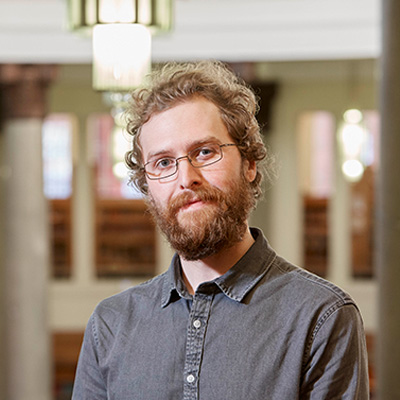 Jack Litchfield, IMS PGR Reseacher, organised a month-long placement at the Wellcome Collection, working on a project with Dr Elma Brenner, and published an article about his research experience.

The Wellcome Library, part of the Collection, includes a database of 15th-century printed books, or incunabula: Material Evidence in Incunabula (MEI).

As part of Jack Litchfield's White Rose College of the Arts & Humanities (WRoCAH) PhD funding, he undertook a month-long placement in 2018. This placement met the Research and Employability Project (REP) guidelines, which stipulate that WRoCAH doctoral researchers must complete a 1-month REP with an external partner or organisation on a topic different from the PhD, in order to develop employability skills in a global and intensely competitive market.

Litchfield organised the project with Dr Elma Brenner, the Wellcome Library's subject specialist in medieval and early modern medicine, with research interests also relating to the materiality of early books and manuscripts and the digital humanities. Working with Brenner, Litchfield traced the ownership histories of the Wellcome incunabula by looking at copy-specific inscriptions, annotations, alterations, and additions.

Litchfield examined the incunabula for 'things like bookseller codes, owner inscriptions, and the more unusual marginal notes and illustrations...I'd then try and date both the hands and ink used, as well as any material features like the binding, pastedowns, etc.' All these details provide valuable clues for provenance, which allow incunabulum to be geographically located and chronologically dated. In turn, this enables the Wellcome Library to track the movement of books across Euope and through the centuries.

I'd then try and date both the hands and ink used, as well as any material features like the binding, pastedowns, etc.

After recording all this data, Litchfield uploaded the findings to the MEI database, as this example shows. Litchfield described the MEI database as 'cataloguing specific copies of incunabula based on this sort of material evidence'. He further clarifed that the database 'ends up describing a book's life story: where a book's been, what happened to it there, etc'.

After his placement finished, Litchfield pitched an article about his work to the Wellcome Collection, titled Medieval Doodles. Litchfield included various examples of doodles, comments, and colouring-in found in the incunabula he worked with, and argued that these features 'often reveal a great deal about the sorts of things late-medieval and early-modern readers did with - and to - their books'. In addition to these examples, Litchfield also discussed the concept of provenance, prompting the question 'to whom  this copy...truly belonged'.

Reflecting back on his experience, Litchfield stated that 'the palaeography I did at Leeds during my MA proved to be invaulable: I really don't think I could have done the project without it'.

The palaeography I did at Leeds during my MA proved to be invaluable.

Litchfield's PhD thesis is titled 'Aspects of Embodiement in Fifteenth-Century Middle English Chivalric Literature', and he is interested in the competing and overlapping discourses (literary, medical, and religious) through which knighthood became recognisable as an innate, embodied identity in late medieval England.