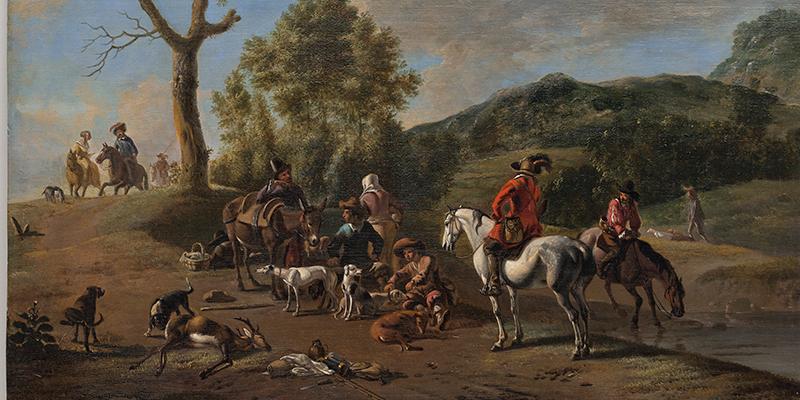 This exhibition, running from 31 May 2019 until 4 August 2019, is hosted by the Stadtisches Museum Schloss Rheydt, in cooperation with the Museum Zitadelle Julich, and is titled, 'Die Jagd/The Hunt - Ein Schatz an Motiven/A Treasure Trove of Motifs'. Examining hunting as a motif in the art of the fifteenth to eighteenth centuries, this exhibition focuses on the specific context of court culture, in which hunting played a prominent role in the construction of princely ideals as well as dynastic identity and continuity.

Romina Westphal, IMS postgraduate researcher, is also currently working at the Stadtisches Museum Schloss Rheydt as 'wissenschaftliche Volontarin' - a young curator. Westphal submitted her thesis in March 2019 and will sit her viva in May 2019. This two-year paid position allows Westphal to conduct curatorial work while learning about working in a museum in general; Westphal described it as 'learning by doing'. Die Jagd/The Hunt is part of her curatorial training.

After the Stadtisches Museum purchased a Flemish tapestry depicting a monkey hunt, Westphal was asked to organise an exhibition around hunting. This offered Westphal 'freedom in the way I wanted to develop the concept of the exhibition. As an art historian, I was mainly interested in the evolution of the hunting motif over the centuries. As the Museum is a Renaissance Manor House and its collection includes artworks from mainly 1500-1800, I wanted to create a thematic exhibition that included a broad chronological spectrum and would show the diverse ways in which the hunting motif was used and how it developed over the centuries'.

Westphal explained that 'developing a curatorial concept for an exhibition always starts with an idea.' After the 'basic thematic structure' is sorted, the concept needs to be explored in more depth. At this point, Westphal found the skills she developed in the IMS to be particuarly helpful: 'This is where my experience in conducting research - for my own PhD project or while working as a research assistant - at the IMS has equipped me with the necessary skills to quickly dive into new subject areas and do efficient literature research'.

Even the act of 'constantly writing' is a valuable skill - Westphal described how this functioned as 'training in how to transmit and present, for example, art historical contexts'. This also made 'writing for the [German] exhibition catalogue easier'.

At the IMS, Westphal studies the art and culture of the fifteenth-century Burgundian court. Her thesis is titled 'Tapestry and Gender - On the Neuf Preux and Neuf Preuses Motifs and the Construction of Burgundian Identity'.