R WE LOUD ENOUGH?: Re-inscribing monuments in the public sphere by the Black Lives Matter movement 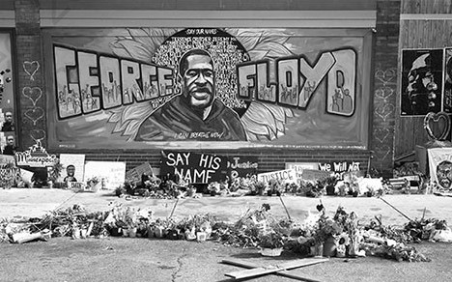 An article by Dr Jim Brogden and Douglas Harper discusses and analyses Black Lives Matter (BLM) protests in the USA and UK.

Dr Jim Brogden, the Programme Leader of the MA in Film, photography and media, in the School of Media and Communication at the University of Leeds has co-authored a new article with Douglas Harper a Professor Emeritus of Sociology at Duquesne University and graduate adjunct professor at St. Thomas University in St. Paul, Minnesota.

The article is available in the special issue of the Art & the Public Sphere journal 10.1.

This article applies a multimodal analysis to explore the potential meanings attached to the re-inscriptions of public monuments and spaces produced during the Black Lives Matter protests in 2020.

Specific attention is given to several contentious examples: the George Floyd Memorial in Minneapolis, Winston Churchill’s statue in London, and the Queen Victoria statue in Leeds. We reflect on the ephemerality of protest re-inscriptions and how they receive a multimodal ‘second-life’ through their (re)presentations in mainstream/social media. Although institutions of power are quick to remove subversive re-inscriptions from the public sphere, we note that the portrait mural of George Floyd continues to function as a universal shrine to the injustices experienced by the wider Black community.

A memorial space which is allowed to linger until its promised transubstantiation into George Perry Floyd Jr Place. In contrast, the other BLM re-inscriptions analysed in this article have now been removed from the physical public sphere, in which their transient messages of protest and public pedagogy will have in some cases been privately and publicly archived digitally on the internet; where evidence is much harder to remove than the public sphere.

Further details on the piece can be found here.

An extract from the final page of the article is featured below for you to read.

An ever-changing palimpsest, reconciling themselves to being over-written by ideological power. It is this awareness of eventual erasure that affected the original intent, the social semiotic content and tone-of-voice of the original re-inscription. It is this sense of urgency (call it intuitive spontaneity) that determined the orientation of the communicative act. As they made their marks, protesters will have been asking, how will this look photographed, or recorded on video? Does it have a strong graphic presence? How will it look in a headline for a newspaper or magazine (online or offline)? Also, how will it operate within protest crowds in real-time, and how will it be read after the event? Will it still resonate with those who support the protest, and will it shock, anger those who are against the protest? In short, within the ephemerality of the immediate act lies a commitment to historical endurance. This paradox lies at the core of subversive re-inscription. These temporal concerns affect the future of the George Floyd Memorial in Minneapolis. How long can the memorial space sustain the attention of the wider audience? How long can the BLM movement and the in-situ ‘gatekeeper(s)’ of the space sustain their energy? At what point does the ‘death of effect’ dissolve the mission to keep George Floyd’s memory in the public domain, long enough to witness real change? And what will be the impact of Derek Chauvin’s recent conviction have on the memorial space?

In considering a longer-term commemorative gesture for George Floyd, is the re-naming of this specific location in Minneapolis as: ‘George Floyd Square’ a sufficient tribute? Will any future commemoration or memorial monument achieve the same affective power of the current heartfelt tribute? And what is an appropriate timescale for a memorial, and how will it materialize into other forms?

We recognize that the imposition of both the Queen Victoria and Churchill statues embody a materiality of subjugation, described by Young (2016: 15) as a ‘governmental monumentality’ which communicates a regime’s material belief in its own importance. Yet, there is a significant section of the population both in the southern states of America and the United Kingdom (nota-bly the south of England) that craves a sense of historical permanence. And although this desire for historical certainty has been shown to be flawed by the unsubstantiated claims of alternative ‘truths’, in particular, those that refer to the imperial slave trade and Black history that these alt-right discourses persist.

These competing narratives are interred in the material presence of monuments and the places in which they are sited. This conflicted situation is compounded by diverse collective memories that resist, challenge or embrace the comforting sirens of nostalgia. The re-inscribed monuments and public spaces explored in this article contribute to current debates seeking the most effective and affective democratic way to represent inclusive de-colonized historical narratives. How might this historical reconciliation be made  manifest – achieved? What kinds of archives might ensure the legacy of recent BLM protests and other forms of Black ‘lived-experience’? The Black in the Day online digital archive is an interactive repository that celebrates everyday black life ‘beyond protest, conflict’ and racism (Ishmael et al. 2020: 214). Surely, new forms of archive must be promoted and cherished as many victims of systemic injustice do not have the luxury to forget.