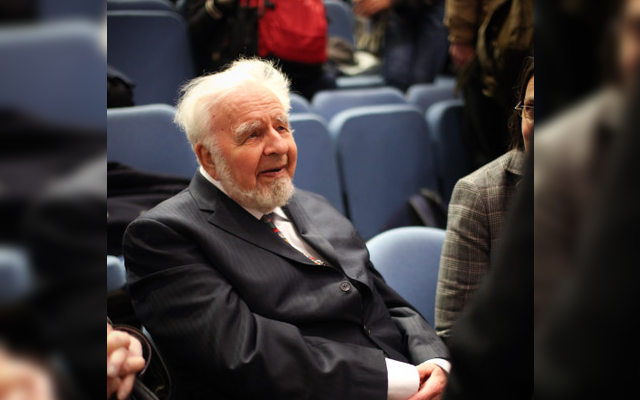 We are deeply saddened to announce the passing of Professor Jay G. Blumler on the 30th January 2021.

An Ever Loved page has been created if you wish to leave memories or condolences.

A School of Media and Communication Student Hardship Fund in memory of Professor Jay G. Blumler has been set up for friends, colleagues and family who may wish to donate in Jay’s memory.

It is difficult to put into words the unique combination of qualities that made Professor Jay G. Blumler such a remarkable scholar, teacher, colleague and friend. His published contributions to the study of political communication (which he established as a recognised academic field in Britain in the 1960s) stand as templates of how to write clearly, critically and humanely. In his practical work in the field, whether observing general election coverage at the BBC, advising parliamentary committees, helping to shape the thinking of Royal Commissions, or engaging in more informal exchanges with media policy-makers and practitioners, Jay maintained consistent values, while always remaining genial and open to other perspectives. As a teacher (a role in which he often told me he liked himself most), his systematic approach to the rigorous explication of ideas was always tempered by his (sometimes mischievous) wit and a desire to make knowledge relevant to what was going on in the world. As a colleague, his generosity was legendary, always finding the best in other people’s work; constantly thinking of creative ways in which like-minded scholars could work together, especially on comparative studies; and firmly committed to international networks that held the field together (He was President of the International Communication Association in 1989 and founded the European Journal of Communication in 1984).

Put together, these qualities begin to describe Jay. But I think that there was another factor that made him who he was. Jay was an idealist in the best sense of the term. His father had been a Marxist and his mother an ardent supporter of Roosevelt’s New Deal. Jay described himself as a ‘red diaper’ baby. He studied in the 1940s at Antioch College, a uniquely progressive institution of higher education that specialised in teaching its students to acquire the capacities needed to further social justice. Jay described his own active idealism as ‘the belief that it can be meaningful, worthwhile and fulfilling (even enjoyable) to strive, often through collective endeavour, to become, say, a better person, to build a better way of life or to work for a better polity and society – according to one’s lights and depending upon the circumstances in which one finds oneself'. The extent to which this basic outlook shaped Jay’s steady work and normative passions cannot be under-estimated. Jay was the most social of social beings, deriving enormous pleasure from the company of his children (Jackie, Luke and Matthew), grand-children and numerous friends. He knew how to enjoy himself and loved to see people he cared about getting the best out of their lives. He was allergic to rancour. He was the kind of humanist that the intellectual world needs.

Born in New York in 1924, Jay served as a Russian interpreter for the US Army in Berlin during the Second World War. (As Chair of the American Veterans Committee in Berlin he was invited to have tea with Eleanor Roosevelt when she visited the city. She had heard of some of the charity work that his committee had done and asked to meet with them). In 1949 Jay came to the UK to teach political theory at Ruskin College, Oxford, and stayed there until 1963 when he was appointed by the University of Leeds as Granada Television Research Fellow. His pioneering work with Denis McQuail, in which they applied uses and gratifications theory to understand how voters responded to television election coverage, was ground-breaking, injecting a degree of methodological rigour and normative insight to the study of political communication that characterised his many subsequent books and articles. In 1966 Jay established the Centre for Television Research and became the University’s first Professor of Public Communication in 1978. He retired from Leeds in 1989 but continued to publish prolifically as well as teaching for one semester each year at the University of Maryland. The annual Jay Blumler lecture was set up in his honour in 2007, attracting leading academics and practitioners from across the world. But it was not only on those fancy occasions that Jay was a key part of the life of our School. He continued to give lectures to students until 2019, invariably ending them with a song; was a hugely supportive mentor of many staff colleagues and PhD students; was a regular attender at research seminars, where his questions were invariably the most penetrating and illuminating; and never seemed to tire of arguing for norms of public communication that befit democracy. Jay will be greatly missed by all of us who knew him, but we will endeavour to honour his memory by seeking to emulate his energy and humanity.