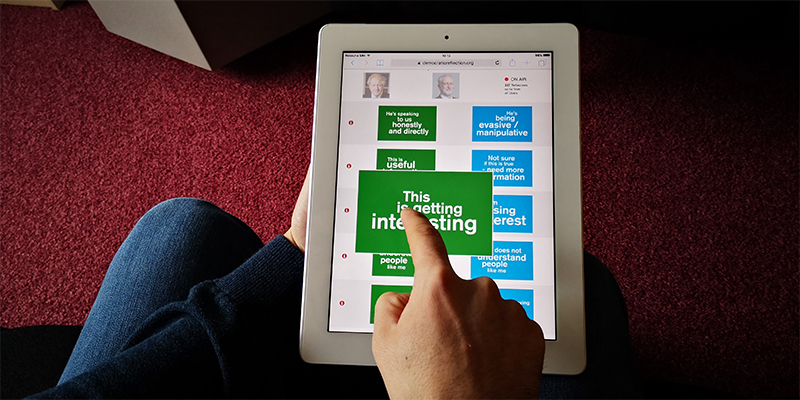 Developed by experts from the University of Leeds, Open University and the University of Sheffield, the Democratic Reflection tool allows voters to react to the unfolding on-screen action using a tablet or smartphone, expressing their views and providing valuable data for analysis by researchers.

As the first televised debate of the 2019 General Election campaign got underway this evening, an audience of 100 undecided voters were watching Boris Johnson and Jeremy Corbyn from the Riley Smith Theatre at Leeds University Union.

For this, the latest live testing of the tool, they were also being filmed by a crew from ITV News, which is funding the latest stage of the research.

Results from the experiment, which it is hoped will inform how future TV political debates are approached, will be published after the election campaign, early next year.

He said: “Not everyone finds it easy to make sense of political debates.

“Our new real-time response app allows viewers to say what they’re getting out of the debate, and what’s confusing or annoying them – while they are watching it.

“We think that this has potential to provide vital democratic feedback from the audience to the politicians and broadcasters.”

Dr Anna De Liddo, from The Open University’s Knowledge Media Institute, said: “Democratic Reflection enables users to interact with the political debate in a truly personal and immersive manner, allowing them to express their spontaneous reactions, reflections and feelings over the ongoing debate before they can be biased by group dynamics.”

Existing audience reaction tools generally only allow viewers to react with a binary ‘like’ or ‘dislike’ when watching TV debates.

Democratic Reflection captures audience reactions, such as trust, democratic entitlements and nuanced emotional reactions. This information can then be linked to the event’s time or video index, thus providing analytical context to make sense and understand people's reactions.

When accessing the platform this evening, the 100 voters were presented with a set of 10 statements on their mobile devices, designed to capture their feedback and reactions. As they watched the debate on a big screen, they selected statements reflecting their feelings.

The system records which statements are chosen, gathering the results to produce analytics on the users’ interaction, which remains completely anonymous.

This data gives a rich seam for the researchers to mine when it comes to providing clues about how voters think and react to what politicians are saying.

It was designed as part of a three-year project funded by the Engineering and Physical Sciences Research Council, exploring how citizens responded to and evaluated televised election debates.