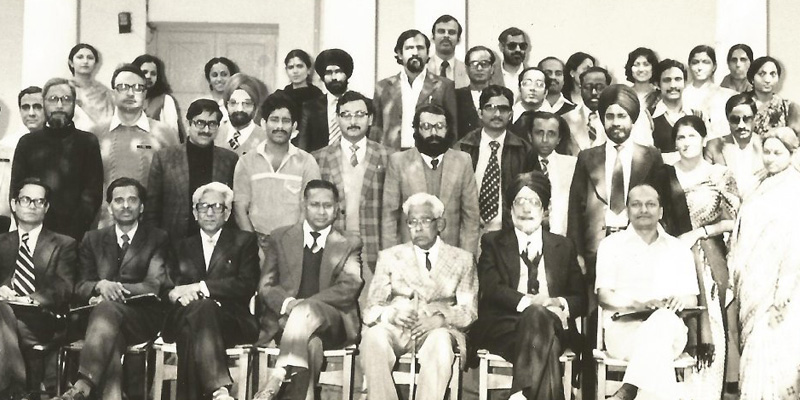 This project, funded by the Arts and Humanities Research Council, traces the development of anthropology as an academic discipline in India and as an instrument of state formation across the transition to independence, ca. 1900 to 1970. Historians of India and other postcolonial contexts have been increasingly interested in the intellectual bases for state formation and social policy, as unique projects of the Global South. Rather than simply looking at anthropology as an outgrowth of colonial ideas, we will explore the many circulations, networks and movements of ideas, intellectuals and their practices, in forming distinctive academic fields. We see this as a vital means of tracing out the distinctive intellectual and ideological underpinnings of the state idea, independently and autonomously from the West. The project is organised around three groups of inter-connected research questions.

2. Institutions: What was the role of governmental, academic and cultural institutions in the creation of anthropological and sociological knowledge in India? How was the knowledge produced by national and international institutions used by the state to inform policy, especially related to development, welfare and the economy?

The first of its kind, this project examines in a holistic and systematic way how anthropology shaped the relationship between state and society in India, and how it contributed to what we describe as India’s ‘intellectual decolonisation’, ca. 1910-1970. The history of anthropology in India is largely underdeveloped. There are two reasons for this. First, the attempts to historicise anthropology are relatively new. George W. Stocking Jr., considered a pioneer in the field, began to publish his writings in the late 1980s. Stocking (1987, 1992, and 1995) was largely interested in the founding figures of Western anthropologists such as Tylor, Boas and Malinowski. Not surprisingly, Stocking has little to offer about the growth of anthropology elsewhere in the South, let alone India. The second reason for the underdevelopment of the history of anthropology in India is the focus on the role of colonial ethnographers and the legacy of the colonial state. Works by Cohn (1996) and Dirks (2001) furthered our understanding of the role of colonial officials in what Dirks termed the ‘ethnographic state’, especially the impact of the census for the consolidation of our modern understanding of caste.

There are a few exceptions that challenged the focus on colonial ethnographers in the growth of anthropology in India. The earliest attempt was made by L.P. Vidyarthi in 1978. An anthropologist himself, Vidyarthi assembled two volumes on the most important works being done by Indian anthropologists during the twentieth century. While rich with interesting information, Vidyarthi’s work is largely descriptive and very little analysis is offered. It was also written before the important work done on colonial anthropology, which changes how we position Indian intellectuals. Similarly, Uberoi et al (2007) co-edited a volume recovering the contributions of several important Indian scholars of the twentieth century. Yet, their book loses relevance by presenting the works of anthropologists in isolation rather than as a part of a larger process. More recently, C.J. Fuller (2016) and Simpson and Tilche (2016) have offered new perspectives on the subject. On his part, Fuller has offered a new vision of the works of colonial ethnographers by challenging the works of Dirks and Cohn. On their part, Simpson and Tilche have returned to the research sites of scholars such as F.G. Bailey, A.C. Mayer and David Pocock in the postcolonial state. Despite their fresh approach, the works by Fuller and Simpson and Jeffrey still focus on Western anthropologists. Thus a gap remains in our knowledge of the development of anthropology and sociology in India.

A more thorough engagement with the lives and careers of Indian academics is necessary to reveal that the tensions of anthropological knowledge in India were not merely a European problem, nor were they resolved by independence. In fact, after 1947 these tensions were often exacerbated by new questions about decolonisation, development, national unity, and ‘modernity’. We will explore the works and interventions of lesser known Indian scholars such as Rai Bahadur Hira Lal (1867-1934), who was instrumental in the survey of castes and tribes in Central India, as well as renowned anthropologists such as L.K. Ananthakrishna Iyer (1861-1937), S.C. Roy (1871-1942), G.S. Ghurye (1893-1983), D.N. Majumdar (1903-1960) and S.C. Dube (1922-19960) among others. With this we will unveil the myriad challenges Indian social scientists faced with their disciplines.

Unlike British ethnographies, designed to classify and rule the colonial ‘Other’, Indian intellectuals found in anthropology a way to understand themselves and the problems of their society. They used their discipline to contest ideologies of racial superiority and to reconstruct what they saw as ‘Indian tradition’. This process was not easy. The first generations of Indian social scientist, such as L.K.A. Iyer, and G.S. Ghurye, owed much to their British education and often accepted many of the theories coming from the West. Yet, the rise of nationalist politics awoke these intellectuals to the problems of colonial knowledge. Through their works, these scholars shaped the way India was to be defined at home and abroad. They were also instrumental in forging the Nehruvian/Congress narrative of ‘unity in diversity’. By tracing the formation of an Indian school of anthropology, this study will shed much needed light on the often neglected history of intellectual decolonisation.

The legacy of these ideological battles is paramount. It may be found not only in the writings of these scholars but also in the institutions they left behind. Organisations such as the Anthropological Survey of India, the Indian Sociological Society, the Bombay Anthropological Society and the Ethnographic and Folk Culture Society for example, played a significant role in defining the new objects of study in Indian social sciences whether it was adivasis, dalits or denotified tribes. Often with strong links to the government, these institutions defined the main characteristics of Indian culture and discarded what they saw as foreign elements. The institutions also had strong connections abroad. Their staff collaborated with foreign organizations such as the Ford Foundation and UNESCO in village development programmes, and assisted in curating anthropological collections like the Museum of Man in Bhopal, India, and the Pitts Rivers Museum in Oxford. That is, the history of anthropology in India has strong political and international features. Aware of the complex nature of anthropology in India, this project will adopt a holistic approach that combines elements of intellectual, institutional and social history.

The main users and stakeholders in this research, include policy organisations (including a government departments), museums, institutes and archives and community organisations based in India.

In the course of formulating this project the team had made contact with a range of policy related organisations concerned with, or working alongside Adivasi and low caste communities. These include, principally, the Ministry of Social Justice, India. Furthermore, we are working in collaboration with a number of community organisations that are campaigning for the promotion of Adivasi and DNT rights, and have established partnership with one organisations in particular:  Budhan Theatre, which is a street-theatre and activist organisation based in Ahmedabad, (India) and one of the leading groups in the promotion of participatory arts among DNT communities. Budhan Theatre is potentially important to introduce policy initiatives relating to affirmative action.

Following the third theme in the project around anthropological networks and informants, we are in the process of structuring co-produced outputs that will act as exhibits and source material for the archival aspects of the project with our key community partners - Budhan Theatre.  The benefits will include the development of research-film and research gathering experience, the development of archival material of use to the organisation, and the preparation of community histories.
Activist organisations who work on caste such as the Anti Caste Discrimination Alliance (ACDA), have agreed to be formal partners on the project. This organisation has lobbied the UK government for the passage and implementation of anti-caste discrimination legislation.  The ACDA shares the project’s interest ‘in the outputs of Scheduled Caste and Scheduled Tribe organisations in India today, in terms of their aims and objectives and how successful they have been in approaching the Government of India’. Our partners at the ACDA have also asked us to provide detailed background material on the definitions of low caste organisations and we aim to forge connections between community organisations in India and CasteWatch UK via the project.

Moreover, this project plans to create and disseminate research in collaboration with Museums, institutes and archives through processes of digitization and co-curation. Our technical advisor Kevin Greenbank helped us to establish a relationship with the main archive and repository of South Asia related material in Cambridge - the Centre for South Asian Studies.  The main benefits the project can provide to archives will be the cataloguing of existing material into a coherent form, and the hosting of new digitised materials. This will enhance, in particular, the existing international coverage of DNT and other Adivasi cultural material online.  Budhan Theatre will receive assistance in the preparation and organisation of their exhibited and archival materials, and we will bring forms of anthropological context to their museums and archives.

We also have a partnership with Sahapedia India, which is an open online resource for the arts, cultures and heritage of India, and has agreed to form a platform for the sharing of the Budhan community archive and other Adivasi/anthropological materials that we shall research, throughout the course of this project. Part of the digitization process has commenced in December 2019.

Colloquium and networking event organised in association with the Asiatic Society of India on 20th of December, 2019:

Through this networking and research sharing event we discussed possible avenues of alliance and co-authored research with the Director of the Anthropological Survey of India, participants from the Asiatic Society of West Bengal and academics including Sociologists, Political Scientists and Anthropologists. We hope to utilise the interest the project has garnered in Kolkata through further collaborative conferences and research outputs.

The next event of this project is going to be held in collaboration with the Manchester Museum and will include panels on Anthropology's relation with museums; the history of specific museums; the relation between communities and how they view their representation in museums, moving on to discussions around possibilities of repatriation. Details of this event and other forthcoming research and networking related information will be updated on our Twitter (@WithinOther) and Facebook page.