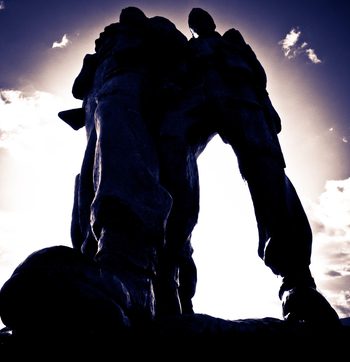 The figure of the war veteran is a familiar trope in public history, culture and debate. But how are the familiar associations of the veteran (masculine, resilient, white, hetereosexual) being challenged in scholarship, archival research, literature and public art? Often situated as occupying a space between military and civilian worlds, how is the voice and image of the veteran constructed and for what purposes? In addressing such questions this series hopes to better understand notions of militariness and post-militariness in the United Kingdom and beyond.

There is an array of existing research across sociology, political geography, international relations, medicine and psychology which addresses the kinds of challenges that those leaving the armed forces face in the transition to civilian life in contemporary times. Since General Sir Richard Dannatt identified a perceived ‘gulf’ between the Army and ‘the nation’ in September 2007, the notion of reconciliation between the public and the forces, and how ex-military personnel can make a ‘successful transition’ have attracted both ample funding and critical scholarly attention.

Whilst government supported bodies such as the Forces in Mind Trust commission research to support policy-making, critical scholars are mindful of how a dominant narrative of ‘successful transition’ belies the complexities of the veteran identity, which might be better understood by listening to veterans’ own experiences and stories. Whilst we cannot hope to encompass all research on the veteran in society, by being attentive to the veteran as a contested, culturally constructed figure – in both historical and contemporary terms – the series joins current debates on the political potency of ‘the veteran’.

Events in the Series

Contested veteran identities and the role of gender – 13 December 2018

The war veteran in culture and society: historical and contemporary perspectives - 21 May 2019