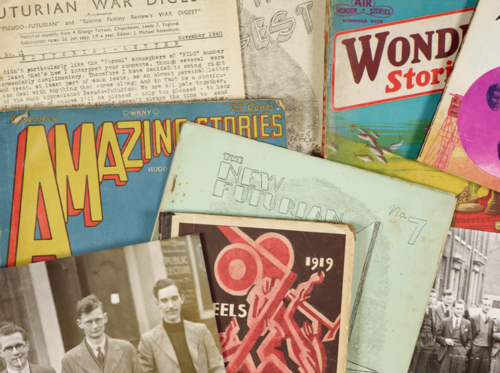 Speculative fictions and explorations of the Fantastic provide a critical lens for studying the possibilities and limitations of the present. Such explorations are influential in political, philosophical, and cultural discourses, through a range of media (literature, cinema, television, theatre, art and design). However, the discourse on the Fantastic is often exclusively Anglophone and metropolitan. We argue that in a world where space and place are increasingly perceived in terms of the global and the local, a broader understanding of the Transcultural Fantastic is more important than ever.

This Sadler Seminar Series will open up the rich traditions of the Fantastic from a transcultural and interdisciplinary perspective, investigating utopian and dystopian thought in art, fiction and film, as well as science fiction, folktales and fantasy literature.

In five events, we will conceptualise the Transcultural Fantastic and seek answers to the following questions:

We will ground our investigation of the Transcultural in the local, highlighting the regional and the provincial as part of the wider transcultural imagination. We will position Leeds within that space and emphasise the University and its collections’ strengths in the Fantastic. Leeds’s own history of the Fantastic – such as JRR Tolkien’s inspiration for Middle Earth and the site of the first World Science Fiction Convention in 1937 – will be the point of departure for the series. We will also explore the importance of ‘the North’ in recent publishing ventures such as the Northern Fiction Alliance, which has a strong focus on translation and the intercultural, as well as being firmly rooted in the local.

Our questions around place and origin will feed into the broader international dimensions of the Fantastic, informed by the research specialisms of the applicants. The Transcultural Fantastic depends on, and benefits from, a global and multilingual exchange of ideas, cultures, traditions and media.

Events in this Series

The events will draw together academic colleagues from Leeds and further afield, alongside writers and publishers, through the following themes:

In 2022 the organisers of this series are delighted to be welcoming to the University of Leeds, Leverhulme Visiting Professor Lars Schmeink.

With Lars based at Leeds for a full semester, the work on this project will continue. This will include finalising the volume 'New Perspectives on Contemporary German Science Fiction' for Palgrave/MacMillan.

Ingo Cornils is Professor of German Studies in the School of Languages, Cultures and Societies. He is a member of the German Association for Research in the Fantastic and has published extensively on German Science Fiction. He is currently writing a monograph ‘Beyond Tomorrow. German Science Fiction and Utopian Thought in the 20th and 21st Century’.

Sarah Dodd is a Lecturer in Chinese Studies in the School of Languages, Cultures and Societies. Her current research explores the fantastic in contemporary Chinese fiction and film. She is one of the co-founders of the PGR/ ECR research group ‘Reading the Fantastic’, and is co-editor of Samovar, a bilingual online magazine of speculative fiction in translation.

Elizabeth Stainforth is a Lecturer in the School of Fine Art, History of Art and Cultural Studies. Her research investigates digital heritage and memory cultures, and she is also interested in theories of utopia and critical studies of history and heritage. She is currently co-editing a special issue on the theme of ‘Utopian Currents in Heritage’ for Future Anterior journal.